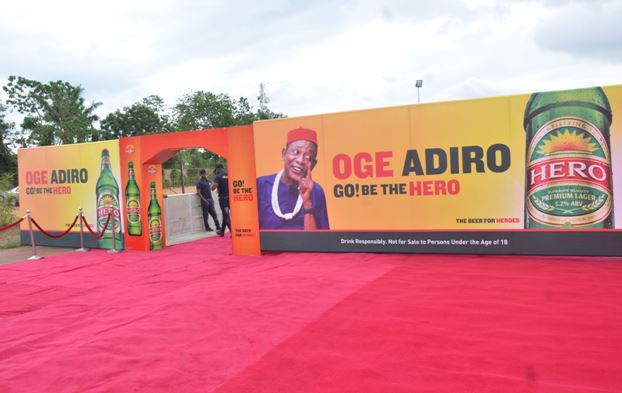 Hero, a premium lager on the stable of International Breweries Plc, a proud part of the world’s largest brewer, Anheuser-Busch InBev, (AB InBev) has been knighted with a new crown cork -a Red Cork and the title of “Mmanya ejiri mara Igbo.”

The Obi of Onitsha, His Royal Highness, Igwe Nnaemeka Alfred Ugochukwu Achebe, gave his blessings to commence the Red Cap ceremony in Onitsha, Anambra State, on Saturday, May 12, 2018, amid applause and excitement by hundreds of Nigerians who thronged the venue of the event, the King’s Courtyard, Ikpeazu Stadium, Onitsha. 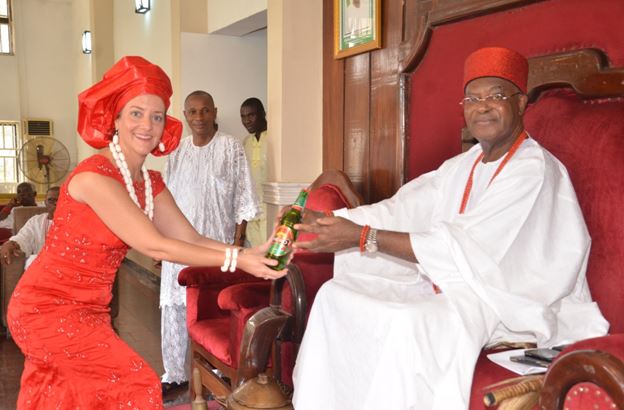 The red cap ideology is of high importance to the South Eastern people of Nigeria as it represents the peak of achievement, societal status and recognition for any individual or brand.

Launched into the Nigerian market in August 2012 without much fanfare, Hero lager beer warmed its way into the hearts of consumers in the South Eastern region and became a symbol of inspiration. The success of the brand draws from its strategic cultural resonance with the people and has catapulted Hero Lager from zero to a market leader in the region. Furthermore, consumers have christened Hero, ‘Oh Mpa’, in reverence and as a mark of respect (Mpa means father in Igbo language).

Speaking when he received the International Breweries Plc team in his palace, HRH, Igwe Achebe commended the management of the company for the honour of commemorating the milestone in Onitsha, the commercial nerve-centre of Anambra State and home to one of its plants.

The event, he said, speaks to the fact that International Breweries Plc., values and appreciates the people of the community wherein it operates, adding that since the inception of the brewery in Onitsha, International Breweries Plc., has not only created jobs for the people but has also been very supportive of activities in the area. “I must commend the efforts of the company. This is surely worthy of emulation. Today, as we knight Hero lager beer and award it the title of “Mmanya ejiri mara Igbo” (A symbol of inspiration), our prayer is that the brand continues to do well.”

Igwe Achebe added that Hero lager beer is a premium brew crafted by the people and for the people, a beer that is a rallying point to all Igbo men and others who need that new strong center of hope and strength to accomplish great things. Hero is also the first beer brand to be awarded a symbolic title in Nigeria.

Arne Rust, Marketing Director, International Breweries Plc., said the ceremony represents the essence of the brand. “Through this ceremony, we hope to inspire consumers to be heroes every day and in every way. We have great plans for our consumers in Nigeria, part of which includes strategically launching several beer brands to suit specific geography and cultures. Hero is a well-established brand in the eastern part of the country. International Breweries Plc., genuinely cares for the culture and tradition of the people, and we will consistently seek ways to showcase our culture and positively impact the society,” he said.

On his part, Marketing Manager Hero Lager, International Breweries Plc., Nigeria, Obumneke Okoli, said, “We want to use this opportunity to show our appreciation to our eastern brothers who have received the Hero lager beer as one of their own. Since we introduced this beer to the Nigerian market, it has clearly found its way into the taste buds of beer drinkers first in South East Nigeria and beyond. The people are happy, excited with a burning flare in them all because of this beer. For this, we say thank you.”

The red capping of Hero will run as an integrated marketing campaign during which people and Nigerian men would be rewarded in recognition of their efforts and mission to “Go! Be the Hero.” As sponsors of the FIFA World Cup 2018, Hero will be wishing the Eagles farewell as they leave for Russia with the unveiling of the world’s biggest football message written with people-“Eagles Be Fearless, Go Be The Hero.”