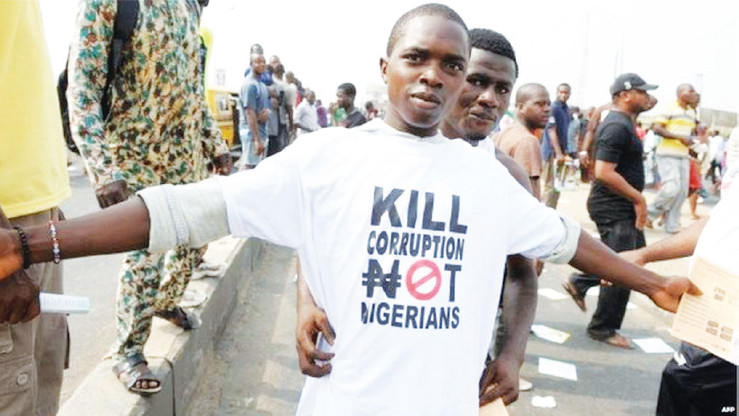 In our series of letters from African journalists, novelist and writer, Adaobi Tricia Nwaubani looks at why Nigerians are hoping to be entertained by a crackdown on corruption. Two major industries in Nigeria share similar elements of melodrama and wildly implausible plots -films and politics.

Films produced by Nollywood, Nigeria’s version of Hollywood, have uncomplicated titles and themes that tell all you need to know, such as Love Me or I Die, Festival of Blood and Mother-inlaw Attack. But if you want thrill and suspense or intrigue, the place to turn to is the equally lucrative political industry.

In January 2012, for example, the Nigerian National Assembly set the stage for a new blockbuster that kept viewers riveted for months.
Nigerians had never before heard anything as brazen. Between 2009 and 2011, we were told, a number of local oil and gas companies had
obtained government subsidies totalling $6.8 billion (£4.3bn) for fuel they never delivered.

Daily on live television, the investigating committee headed by MP Farouk Lawan did more than expose the scam. The committee named names. At the conclusion of the proceedings, Mr. Lawan received an ovation from his fellow legislators for such excellent and thorough work.

“The late Obafemi Awolowo, a statesman who played a key role in Nigeria’s independence movement, once described government in the West African state as a ‘few holding the cow for the strongest and most cunning to milk’” Enter billionaire oil magnate, Femi Otedola. His two companies had been named by the committee.

Publicly, Mr. Otedola denied the allegations. He accused Mr. Lawan of having included the names of his companies on the list solely for the
purpose of soliciting a bribe from him – alleging the MP would have erased the names from the list once he received payment.

The price for such consideration on Mr Lawan’s behalf? $3m. Mr Otedola revealed that he had already paid about $500,000 of the total bribe demanded. He had also, he said, videotaped the entire transaction secretly.

Nollywood 2.0 In one alleged scene described by Reuters news agency, Mr Lawan, dressed in a traditional long “agbada” shirt and cap, is seated beside Mr Otedola, sorting through a huge pile of dollar bills. Afterwards, he fills his pockets until they overflow, and then stuffs the rest of the money into his cap.

It all seemed very Nollywood 2.0. Mr Lawan was then charged in court with soliciting from the oil tycoon. He denied the charges and calmly maintained the same righteous poise. “I believe in the end,” he said, “Nigerians will come to believe and see that for the 13 years I have
invested in championing good governance, responsibility and probity in this country, that this last trial is a trial from God, and I believe in the end we shall prevail.”

He did – completing his tenure in the House in June 2015. The issue soon vanished into the Bermuda Triangle of Nigeria’s many highly publicised corruption scandals.

Nollywood films are a big hit in many African countries
Mr. Otedola is still supplying fuel and the alleged $500,000 paid to Mr. Lawan has also not been retrieved. So Nigerians still do not know
whether Mr. Otedola was guilty of fuel subsidy scamming or if he was the victim of extortion. Perhaps, this shall be revealed in a Part Two.

This is just a snippet of corruption in Nigeria. During her tenure as US Secretary of State, Hillary Clinton, in a report on global human rights in Nigeria presented to the US Congress, expressed utter astonishment at the depth and breadth of corruption in Africa’s main oil producer.

She described the three tiers of the Nigerian government as riddled with “massive, widespread and pervasive corruption”. The late Nigerian Obafemi Awolowo, a statesman who played a key role in Nigeria’s independence movement, once described government in the West African state as a “few holding the cow for the strongest and most cunning to milk”.

Femi Otedola is a wealthy oil dealer and denied the allegations made by Farouk Lawan
Many Nigerians, and concerned observers around the world, have now placed their hopes for an end to all these shenanigans on Muhammadu Buhari, Nigeria’s new president.

They insist that his reputation as a disciplinarian and his austere lifestyle will do the trick. They believe that his historic election in March marks the beginning of a revolution that will sweep corruption away from Nigeria.

The media has already begun tantalising viewers with teasers with headlines such as “Buhari to Revisit $182m Halliburton Bribery Case”, “Buhari Vows to Probe ‘Missing’ NNPC $20bn” and “Buhari Tracks Stolen Funds to US, UK, Switzerland”.

If indeed President Buhari goes ahead to conduct these investigations, the country may very well be on the verge of cementing its star on the walkway of global entertainment. Nigerians at home and abroad can hardly wait for the cameras to begin to roll.

‘Kari Qualified as Commissioner for Insurance’