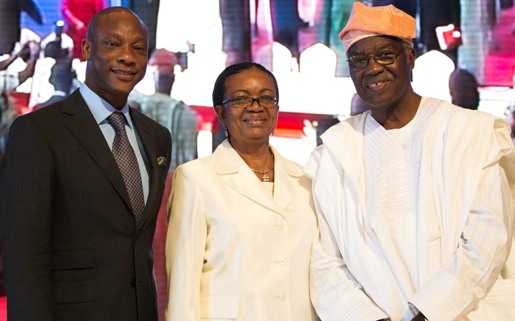 Guaranty Trust Bank Plc has announced the appointment of Mrs. Osaretin Afusat Demuren as the New and 6th Chairman of its Board of Directors, at the 25th Annual General Meeting of the Bank which held on Tuesday March 31st, 2015 at Oriental Hotel, Lekki-Epe expressway, Lekki, Lagos.

Demuren was presented to Shareholders as a replacement for the outgoing Chairman, Mr. Egbert Imomoh, who is retiring from the Board in compliance with the Bank’s Code of Corporate Governance, which stipulates a retirement age of 70 years for Non-Executive Directors of the Bank.
She joined the Bank in April, 2013 as a Non-Executive Director. She served as a member of the Board Risk Management Committee from April 2013 and became the Chairman of the Committee in July 2014. She was also a member of the Board Remuneration Committee and the Board Information Technology Strategy Committee.

Demuren had a successful career with the Central Bank of Nigeria (CBN) which spanned over 33 years, during which she served as Director, Trade and Exchange Department and was deployed to serve as the Director, Human Resources Department in 2004; a position which she held until her retirement from the CBN in December 2009. She was the first female Director of the CBN.

Commenting on the recent development, Segun Agbaje, Chief Executive Officer/Managing Director of Guaranty Trust Bank Plc, said that “the Bank has a well-defined succession strategy to address management vacancies as well as statutory and planned retirements.”