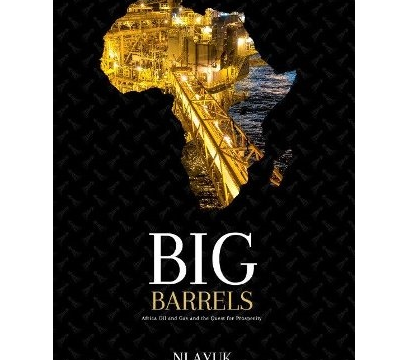 A year after its release, the global momentum created by the bestseller on Africa’s oil and gas industry, “Big Barrels: African Oil and Gas and the Quest for Prosperity”, has led to its re-launching in French, Spanish and German.
“The narrative of the book makes its success,” explains author NJ Ayuk, a prominent African energy lawyer. “Big Barrels tells a hidden story of Africa’s oil & gas industry, one that speaks of positive achievements and lays out the capabilities such an industry has to transform the future of African economies and people.”
The English version of the book was launched in English in June 2017 at Africa Oil & Power 2017 in Cape Town, and has since become a huge hit in Africa and abroad, taking aim at the perception that in Africa oil and gas can do no good, arguing against the perception of a “resource curse.”
The book uses specific case studies from countries like Nigeria, Ghana, Angola, Tanzania and Equatorial Guinea to showcase what African nations have done right with regards to exploiting their oil and gas resources.

It notably highlights specific areas of success including good governance in Ghana, environmental stewardship in Gabon and employment and enterprise creation in Nigeria. In doing so, Big Barrels effectively allows Africans to recapture the narrative surrounding their oil & gas industry, and open it up to non-cursing, African voices.
Since its first launch, Big Barrels has received extensive global media attention, being notably repeatedly featured and debated over on BBC Africa, CNBC, Forbes Africa, Bild Zeitung, Financial Afrik, SABC, DW and Voice of America. As Funke Michaels, a Mason Fellow at Harvard University, said in a review, “I see readers coming away encouraged by these cases, and effectively freed from the myth that Africa cannot be cured of the age-old “resource curse.”
The new languages editions of the book will be launched at Africa Oil & Power 2018 in Cape Town from Sept. 5-7.