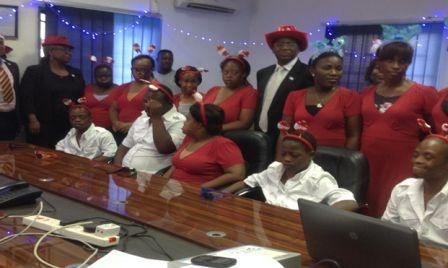 The Future Unity Glanvills (FUG) Pensions Limited, one of the frontline pension fund administrators in the country, has partnered with Down Syndrome Foundation (DSF), to organise a Christmas Carol for children of the foundation.

The company, known for its drive to pay back to the society through its Corporate Social Responsibility (CSR) project, has been in the forefront in ensuring that people with special needs, including the children with Down Syndrome have a sense of belonging.

At this year’s Christmas Carol organized and hosted by the company for the children of the foundation, the Managing Director, FUG Pensions Limited, Mr. Usman Suleiman, said the gesture was to assist the children with Down syndrome have a sense of belonging in the society, adding that the PFA, in the past, has been supporting not just the DSF, but also in other CSR projects within the environment it operates.

He maintained that his PFA had in the past, supported the Foundation morally, physically and financially, in a bid to give back to the society it is conducting its business activities. Suleiman pledged that his firm will continue to impact the lives of the less privileged so that they can be successful in the society,

“This is also an avenue to sell not only FUG Pensions brand, but also the entire pension scheme in the country”. Suleiman stressed.

Speaking on the sideline of the event to journalists, the General Manager & Head of Investment, FUG Pensions, Mrs. Ngozi Chuks-Okeke, said, aside the partnership with Down Syndrome Foundation, her company has recently partnered the Federal Road Safety Corps (FRSC) on ember months, donating reflective jackets and distributing handbills to create awareness on speed limits, driving with good tyres and how to have a safe drive all the time, especially, in the current month, where people travel for Christmas and New Year festivals.

She added that the firm equally partnered with Lion’s Club, adopted a classroom at Anthony Village Primary School, where it furnished the classroom with furniture as well as partnered with Bells of Mercy Orphanage Home, all in Lagos State.

While urging other corporate organisations to extend their helping hands to the less privileged in the society, she promised that her PFA will continue to initiate and support projects, such as this, in a bid to grow and develop the country.

This is our own little way of contributing to the society we operates in and we will continue to do more of this, she pointed out.

FUG Pensions was licensed by the National Pension Commission (PenCom) on the 21st of June, 2007 to carry on the business of Pension Fund Administration. Its shareholders are UnityKapital Assurance Plc- an insurance company with shareholders’ funds of N8billion and Glanvill Enthoven & Co Limited- an insurance broking company with over 30 years’ experience in pension fund management and administration.

FUG Pensions has an authorised and paid up share capital of N1.5 billion and operates from six regional offices in Port Harcourt, Ibadan, Abuja, Kano Maiduguri and Lagos and several branch/zonal offices spread across the country.

About Down Syndrome Foundation

Down Syndrome Foundation Nigeria (DSFN) is a non-governmental, non-political, not-for-profit association of children with Down syndrome, as well as their parents, guardians, care –givers and other interested stakeholders. Most of these children are neglected, relegated, or abandoned by their parents and society on the basis of culture and myths that tend to stigmatize them and their family.

They are equally abused physically and sexually with impunity. In extreme cases even their rights to life itself is denied them. It is under this harrowing and ugly backdrop that Down Syndrome Foundation Nigeria (formerly an Association) evolved on the 4th of December 2001, with the avowed commitment to bridge the gap between children/adults with Down syndrome (DS) with the rest of the society, through a support system that seeks ultimately to integrate them into the mainstream of the society which they belong.