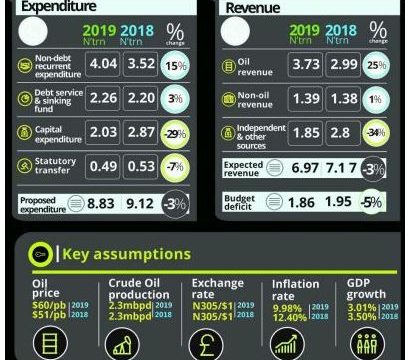 This week, Afrinvest Research says it is turning its attention to the on-going business environment reforms started by the President Buhari administration in 2016. The Presidential Enabling Business Environment Council (PEBEC) is the institution tasked with the reforms that make it easier to do business in Nigeria.

The improvements are expected to come in the form of a reduction in cost, time and procedures in starting and running a business. The overall target at the commencement of the reforms was to improve Nigeria’s ease of doing business rank to the top 100.

Since 2016, PEBEC has implemented reforms in three phases (National Action Plans — NAP), mainly along the eight core focus areas of the World Bank’s Ease of Doing Business ranking (EoDB).
The results from the actions taken — three cycles of actions so far — have been mixed. We observed that the largest improvements were in the earlier phases of the programme, as the initial momentum seems to have waned.

In the first phase, PEBEC hit the ground running by achieving c.82.0% of its reform targets over a 60-day period from February 2017. This led to an improvement in Nigeria’s EoDB ranking by 24 places to 145 out of 190 countries.

The second 60-day National Action Plan expanded the scope of the reforms to include such areas as Selling to Government, Trade Within Nigeria and Trading Across Borders. The reforms achieved a poor success rate of c.52.0%.

Between February and April 2018, the third phase of reforms covered nine indicators and the success rate marginally improved to c.62.0%. These reforms improved Nigeria’s score from 52.03 to 52.89 in the 2019 EoDB rankings, but the country slipped one place to 146 out of 190 countries. We suspect that the slow pace of reforms in the second and third phases had a negative impact on the 2019 ranking.

Business Environment Reforms Necessary but Insufficient to Attract FDI
The fourth National Action Plan has been set in motion by PEBEC, and it is intended to cover ten reform areas from March to April 2019.

Since the target is to achieve a ranking within the top 100 when the 2020 EoDB ranking is published in October 2019, we make the case for faster and more effective implementation to achieve a better success rate. This is because strong upward movements in the EoDB rankings require that the pace of reforms is faster in Nigeria than in other countries.

We also believe PEBEC must look past implementing reforms on paper, the processes must be institutionalised to generate gains. Anecdotal evidence reveals that Nigerian institutions are slow in transitioning to new processes, thus perpetuating inefficiency and corruption, which have always made doing business difficult. We posit that helping institutions attain quicker transition and monitoring their processes post-reforms is necessary for sustainable improvements.
We are yet to see strong improvements in FDI in Nigeria due to the business environment, which remains unaccommodating despite reforms instituted of late. This is because a higher EoDB ranking is not sufficient for increased investment.

To attract investment, we believe PEBEC and the FG have to look beyond gains in the ranking as business environment reforms must be complemented by pro-business regulations, accommodative monetary and fiscal policies, and the opening up of sectors to private investment.

Domestic Equities Market: Market Sentiment Remains Weak
This week, activities in the domestic equities market responded to several factors including abating political risks, positive earnings releases and dividend declarations. Despite these positives, market sentiments have remained weak with unimpressive dividend yields dampening sentiments further.
At the start of last week, the benchmark index posted gains of 95bps and 14bps on Monday and Tuesday respectively, due to bargain hunting in GUARANTY, ZENITH, UBN and INTBREW. However, by midweek the market maintained a downtrend till week close, shedding 80bps cumulatively due to profit-taking in ZENITH, DANGCEM and GUARANTY as well as sell pressures on ETI, SEPLAT and NIGERIANBREWERIES.

Foreign Exchange Market Review and Outlook: Reserves Level Rises as Capital Inflows Increase
The Naira traded within tight bands (N360.00 – N361.00/US$1.00) during the week as the Central Bank of Nigeria (CBN) sustained its weekly intervention to ensure liquidity and stability of the exchange rate across all segments of the market.

Although the Apex bank’s intervention put pressure on the reserves pre- presidential election, we observed a c.US$0.2bn uptick in the foreign reserves to US$42.5bn which has largely been driven by foreign portfolio inflows into the fixed income market.

Based on capital inflows and sustained CBN interventions, the naira traded flat at the parallel market and appreciated on the I&E window by N1.22 to close the week at N360.46/US$1.00 (previous week close: N360.80/US$1.00). On the other hand, the CBN spot rate depreciated 15kobo to close at N306.90/US$1.00.
In the near term, we expect the naira to remain at current bands and any pressures muted as the CBN continues its weekly interventions. We also anticipate the pace of capital inflows to be sustained in the short term provided polity risk subsides and rate hikes in systemically important central banks remain on hold.

Money Market: Rates Trend Lower on Improved System Liquidity
The CBN has maintained the pace of OMOs in recent times, holding three auctions this week for instruments worth a total sum of N645.8bn across tenors between 91-days to 192-days at marginal rates between 11.9% (on the shorter tenor instruments) to 13.48% (on the longer tenor instruments).

Given the overriding aim of the CBN to keep price levels moderate, we expect OMOs to continue apace with recent trends to limit the possibility of speculative attacks on the naira, as system liquidity is expected to be buoyed by OMO maturities worth N88.4bn.
In the secondary Treasury bills market, the average yield increased significantly by 0.8%to settle at 13.9%, as investors sold off instruments in the week to partake in the OMO auctions given the more attractive discount rates on instruments auctioned. We expect that if the CBN maintains the pace of auctions, as is expected, that market activities will mirror this week in the next week.
Consequent on the improved system liquidity in the week, money market rates – Open Buy Back (OBB) and Overnight (OVN) rates –pared to 9.2% and 10.1% respectively from 16.3% and 17.4% recorded in the prior week. We expect the rates to remain moderate in the next week.