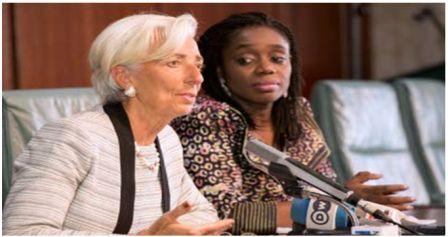 The Minister of Finance, Mrs. Kemi Adeosun has told the visiting Director, African Department of the International Monetary Fund (IMF), Mr. Abebe Aemro Selassie that the Federal Government is leaving no stone unturned in its bid to make infrastructure development a priority.

Taking the visiting IMF chief through some of the initiatives of the current administration, the Minister said the President Muhammadu Buhari administration is doing everything to make Nigeria productive in every aspect.

This, she said, would be achieved by shifting emphasis to the development of infrastructure, which had been neglected by previous administrations.

According to her, with a population of about 180 million people, Nigeria has no choice but to be productive, saying this can only be achieved through infrastructure.

She recalled that “the allocation for capital projects in 2015 budget was just 10 per cent while the recurrent was 90 per cent which had been the case in the past six to seven years.”

She assured that the Federal Government is working with the private sector, and justified Nigeria’s deficit budget, saying there is no problem with running a deficit budget as long as it is done with emphasis on capital project financing.