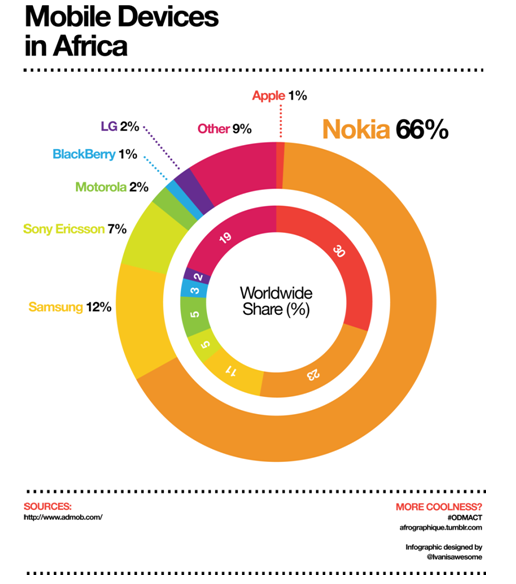 Africa’s smartphone market bounced back from two consecutive declines to post quarter-on-quarter (QoQ) growth of 4.4% in Q3 2017, according to the latest insights released today by International Data Corporation (IDC).

The global technology research and consulting firm’s Quarterly Mobile Phone Tracker shows smartphone shipments for the quarter reached 21.7 million units, spurred by ongoing economic recoveries in some of the continent’s major markets. Year on year (YoY), shipments were down -5.5%, but this still represents an improvement on the YoY performance seen in the previous two quarters.

In the feature phone space, shipments totaled 33.7 million units, down -3.6% QoQ after increasing for the three previous quarters. However, YoY, the feature phone market was up 11.5%. Feature phones still constitute a significant 60.8% share of the total mobile phone market as they adequately address the needs of African consumers that have limited purchasing power and require a reliable long-lasting mode of communication, particularly those in rural areas.

Combining smartphones and feature phones together, the overall Africa mobile phone market saw shipments of 55.4 million units in Q3 2017, which represents a slight QoQ decrease of -0.7% but an increase of 4.2% YoY. There were contrasting fortunes for the continent’s two biggest markets, with Nigeria seeing shipments increase 1.7% QoQ while South Africa suffered a decline of -8.0% over the same period.

“The Nigerian economy is slowly coming out of recession and we’re seeing signs of steady improvement in consumer demand for mobile phones,” says Ramazan Yavuz, a research manager at IDC.

“However, consumer spending remained slow in South Africa during Q3 2017 as many consumers opted to delay their purchases until Q4, when major campaigns take place around Black Friday and the lead up to Christmas. In addition, an unstable currency and challenging economic environment do not present favorable conditions for a surge in mobile phone shipments in the country.”

In terms of the vendor landscape, Transsion brands continued to lead the smartphone category in Q3 2017 with 30.1% share, followed closely by Samsung on 26.1%.

“The Transsion Group maintains its position by engaging in aggressive sales and marketing campaigns, and by designing devices that address the specific needs of each local market,” says Nabila Popal, a senior research manager at IDC.

“Samsung’s success in Q3 2017 was primarily due to its economically priced J series, which helped the vendor post a 0.6% QoQ increase in smartphone shipments for the quarter.” In the feature phone space, Tecno and itel continued to dominate proceedings in Q3 2017 with a combined share of 58.9%.

IDC’s research shows that 4G phones are growing in popularity, with shipments increasing 5.5% QoQ in Q3 2017 to finally account for a majority share of the smartphone market at 52.9%. A drop in prices for entry-level 4G phones and an increase in the number of 4G networks across the continent are driving this growth in 4G devices.

Looking ahead, IDC expects Africa’s overall mobile phone market to grow 6.2% QoQ in Q4 2017, spurred by the increase in demand that typically accompanies the festive season.

However, the forecast for the year ahead is not as positive, with IDC expecting overall shipments to remain relatively flat through 2018, with a decline in feature phone shipments and slower uptake of smartphones causing the market to contract -0.5% YoY.