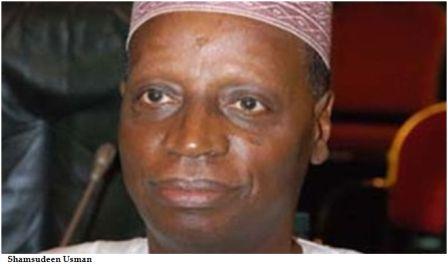 Former Minister for National Planning and Minister of Finance, Shamsudeen Usman has advised insurance operators in the country to consolidate for growth in the size of the industry.

Shamsudeen who made this known while operators at an insurance forum in Lagos said the small size of the industry has hindered it from playing the role of a stabiliser in economic crisis.

Citing reports from Agusto and Co., he said the balance sheet of all insurance companies is less than one third of one of the banks.

According to him, there are certain characteristics of the insurance industry that actually makes it more of a stabiliser especially in terms of economic crises like we are going through in the country.

He stated that the ability of the sector obviously to play that stabilising role depends on the size relative to the rest of the economy.

“Part of the reasons why the Nigeria insurance industry has not played the stabilising role is about the size of the industry. The balance sheet of all insurance companies is less than one third of one of the banks. This tells the issue of the size. I was Deputy Governor in the central bank when the consolidation exercise happened with credit to Former Central bank Governor, Charles Soludo.

“We went into a room and he made a presentation to the banking industry. Initially there was a lot of opposition. I remember when we were appointed to the Central Bank in 1999, there were 97 banks. The total balance sheet of the 97 banks was less than one of the bank today. A 100 per cent of 1 is 1. 10 per cent of 1000 is 100. So do you prefer a 100 per cent of a tiny little thing or 10 per cent of a big thing which can be 10 times the value of whatever you are getting?

“I believe that the insurance industry itself has to be more forward looking into consolidation like it happened in the banking sector. Yes, many of you are afraid to lose your position of managing Director, executive director of a small corner. But I think the industry will achieve more if you can come together and get bigger.

The former minister however said that the industry has huge potential that it is yet to tap into.

“The potential even from the point of view of the economics theory is that there is a strong link between the growth of an economy and the growth of the insurance industry. This has been a subject of many as even the empirical studies in other countries partly because of the role again that the industry plays in economic growth and stability through improving the investment climate and promoting more efficient volume and mix of activities. A number of research has shown that there is a positive closer relationship between the industry and the wider economy.”