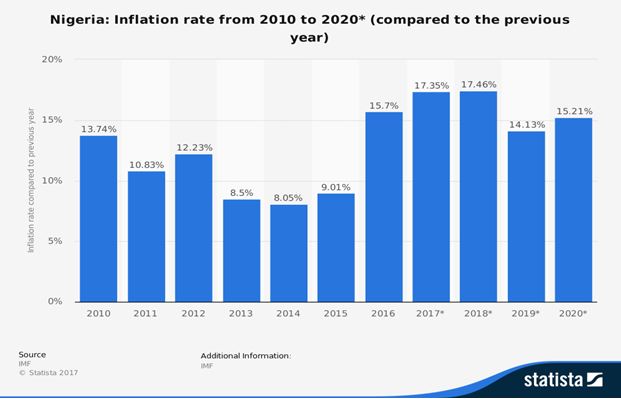 According to Cordros Capital, Nigeria’s headline inflation rate commenced 2018 with sustained deceleration (for the 12th consecutive month), which it started last year, moderating to 15.13% y/y (compared to 15.37% in December 2017).

January’s decline was widely expected, as the figure came in line with both our forecast and Bloomberg compiled average estimate of 15.14% and 15.13% respectively.

The high base of January 2017 supported the moderation recorded during the period, as the impact of the lingering fuel scarcity, particularly in the Federal Capital Territory (FCT) and some northern states, during the month appeared muted.

On month-on-month basis, the headline index increased by 0.80% (vs. the unexpected 0.59% recorded in the previous month).

We think the Monetary Policy Committee (MPC) will further hold the line on its policy stance, as the current inflation rate (at 15.1%) remains at a growth inhibiting level and the current level of real interest rate is appropriate to equilibrating the objectives of price stability, exchange rate stability, and output stabilisation.

Though still high, food inflation increased at a slower pace of 18.92% y/y in January, compared to 19.42% y/y in the preceding month, driven by a faster rate of increase in imported food prices.

Core inflation was unchanged at 12.10% y/y during the review period, failing to reflect the overall impact of the lingering fuel scarcity which resulted into higher fuel prices across most states in the country.

Specifically, we estimate the headline inflation rate to increase at a slower pace of 14.66% y/y (1.09% m/m) in February, supported by the relatively high base of the corresponding period of 2017.