NPA MD: ‘We Are Positioning for Greater Efficiency’ - Business Journal 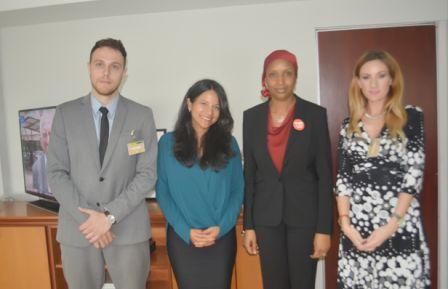 The Managing Director of the Nigerian Ports Authority (NPA) has promised to work assiduously towards ensuring that the Nation’s Ports Master Plan is put into effective use and to serve as a reference point in all matters that concern greater operational efficiency in the industry.

She added that the NPA would prioritise the utilisation of railway networks in the efficient distribution of cargo across the nation Seaports in line with best practices.

The Managing Director who was speaking when a team from the Oxford Business Group UK, paid her a courtesy call stated that the Maritime world is embracing intermodal dictates and “the NPA would ensure we key into that most efficiently”.

Concerning trans-shipment, she stated that the NPA’s synergy with the private sector, geared towards the actualisation of deep seaports across the nation would help position the country for greater economic relationship. Usman added that the competitive tariff regime being put in place would “place us on a better platform in the sub-region”.

On the gridlock hampering efficient service delivery at the Ports, she said there is already a robust approach amongst stakeholders stressing that results concerning this subject would take no time in reflecting positively on the time hitherto spent on the affected access roads.

Furthermore, she reiterated the facts that the Management of the Nigerian Ports Authority would prioritise the rehabilitation of infrastructure at the Ports so as to bring to bear optimal operational activities which she said would be key in more revenue generation for the country at this time of need for the economy.