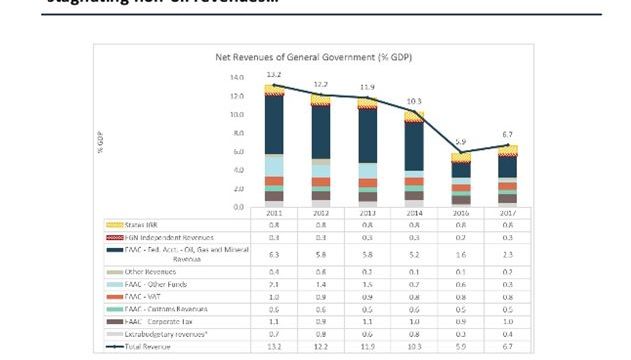 Nigeria might be facing another financial crisis as a result of government failing revenues, BudgIT has warned.

In an analysis of the federal government 2018 budget performance, released on September 2, 2019, the civic-tech organization points out that the government spent a sum of N7.51tn based on total revenue of N3.86tn, creating a deficit of N3.64tn. It also noted that while FG planned to earn N7.16tn in 2018, it was only able to reach N3.85tn, which represents 54% revenue performance.

According to BudgIT’s examination, the government is also spending more on debt servicing at the same time its debt profile is growing astronomically. Although it recorded a revenue of N3.86tn, FG spent N5.86tn on recurrent expenditure, meaning that N2tn was borrowed to fund recurrent expenses.

“In 2018, FG spent N2.09tn on servicing public debts, a figure that grew from N1.63tn in 2017. As it is, FG is spending so much on servicing debt while it plans to even borrow more. The government borrowed a total of N1.74tn in 2018, yet,  the sources for additional deficit (borrowing) of N1.90tn was not stated in its report” says BudgIT analysis.

However, oil accounts for 51% of 2018 public revenues, while independent revenue from government agencies grew from N295bn to N395bn. CIT also had an impressive 21% growth, reaching N660bn.

We have seen the growth in oil revenue (due to higher prices and more stable production) that shot up from N1.12tn in 2017 to N1.96tn in 2018, FG’s revenue grew from N2.66tn in 2017 to N3.86tn in 2018. Worthy of note, however, is the fact that the federal government did not record any earned income from recovered assets or sales of oil and gas assets in this year.

“The total recurrent expenditure shot up to N5.39tn in 2018, a N800bn growth in one year without new minimum wage implementation.

A sum of N329bn was utilized for power, works and housing projects, N139bn for transport projects, N52bn for health projects, N47bn for education projects, N71bn for water resources and N135bn for agriculture projects respectively. Health and education are still poorly invested in.

The government claims that it spent N1.65tn on capital expenditure in 2018. In his reaction, Gabriel Okeowo, BudgIT Principal Lead, said that BudgIT will ask for details of these expenditures for proper verification and public accountability.

“While we wonder why other financing sources are not explained by the government, it is clear that Nigeria has a huge revenue problem and the current pace of recurrent expenditure growth (mainly salaries and debt servicing) is not sustainable,” Okeowo submits.