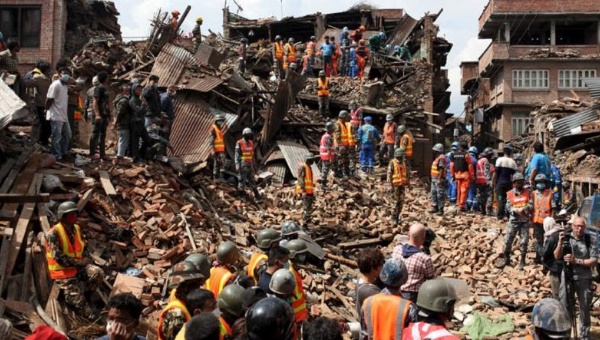 Natural disasters around the globe have resulted in economic losses of roughly $7 trillion since 1900, according to a new calculation from scientists.

Their database, which contains some 35,000 events, reveals the catastrophes have also resulted in more than eight million deaths.

The analysis should assist governments with crisis planning and response, the researchers say.

Their results were presented at the European Geosciences Union meeting.

The team, led from the Karlsruhe Institute of Technology in Germany, scoured the media and old records for all the information it could find on floods, droughts, storms, volcanoes, earthquakes, and wildfires.

Reports in more than 90 different languages were assessed for the group’sIntegrated Historical Global Catastrophe Database.

Over the 1900-2015 period, roughly 40% of economic losses are ascribed to flooding. Earthquakes accounted for about a quarter; storms for about a fifth; 12% was due to drought; 2% to wildfire, and under 1% to volcanic eruptions.

But although the economic losses in absolute terms have increased during the past century, these losses actually now represent a smaller fraction of the total value globally of buildings and other infrastructure.

It means, say the scientists, that in many instances, we are now doing better at mitigating the consequences of natural disasters.

Indeed, when the team took the historic costs in each nation and summed them in 2015 US dollars, it was clear that not even the nature of the disasters is spread evenly.

For example, in the UK the largest losses tend to be from floods; Chile and New Zealand have to count their greatest losses from earthquakes; in large parts of central Africa and South America, it is losses from heatwaves and drought that top the impacts.

And using data just from more recent decades, the global patterns shift as well. Big efforts have been made in places like China to improve flood defences, which means losses from water inundation are not the factor they once were.

“If we just take data from 1960, we see a change in the trend; we see that storms are having a bigger piece of the pie,” the civil/structural engineer and geophysicist James Daniell told BBC News.

“About 30% of all losses are due to storms and storm surge these days. Earthquake as well is still around the 26% mark.”

Daniell says analysing the economic consequences of past disasters can help governments and aid agencies better assess the scale of the needed response in current and future events.

For example, it permits a rapid assessment of the likely costs of Saturday’s quake in Ecuador. Economic losses there could top $2bn, according to the group’s modelling.

Likewise, the losses from Japan’s big tremor on Friday are probably going to be in the region of $12bn.

On mortality, in terms of the absolute numbers, total deaths from natural disasters remain reasonably constant (around 50,000 people per year on average). However, again, relative to the population of the globe as a whole, which is growing, deaths from such catastrophes are declining, according to Dr Daniell.

The researcher emphasises that all the numbers he quotes have quite a wide range. For total economic losses since 1900, this is between $6.5 trillion and $14 trillion, and depends on the particular metric used to convert “event dollars” to current 2015 US dollars.

Similarly, it is very hard to get definitive death statistics. Numbers will very frequently be over-estimated or under-estimate