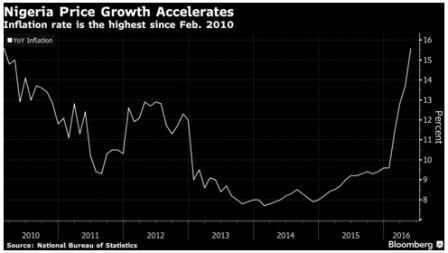 The National Bureau of Statistics (NBS) released the inflation figures for the month of October on Monday 14th October. Broadly in line with our expectation, Year-on-Year (Y-o-Y) Headline inflation inched higher from 17.9% in September to 18.3% in October 2016.

Month-on-Month (M-o-M) movement of the Consumer Price Index (CPI) also bucked recent deceleration after 4 consecutive months, rising 83bps in October (from 81bps in September) with increases recorded across almost all major divisions which contribute to the Headline Index.
The Food index rose 17.1% Y-o-Y in October (from 16.6% in September) owing to the increase in prices of Bread and Cereal, Fish and Meat. The Core sub-index also climbed 18.1% Y-o-Y from 17.7% Y-o-Y in September as fuel prices (solid and liquid fuels) and electricity tariff recorded further increases.

However, M-o-M movement in the Core sub-index eased to 75bps (lowest in 11 months) compared to 96bps in September as average prices of petrol declined to N145.90/l from N146.30/l in September and average price of diesel also moderated to N187.25 from N192.69 recorded in September.

However, average price of kerosene in October rose to N292.73 from N288.68 in September.
Broadly, inflation remains driven by structural supply side factors ranging from weaker exchange rate pass-through on the Core basket and Imported Food index to hike in fuel and electricity prices. Average yield across benchmark bonds rose 10bps on Monday from Friday’s close following the release of the CPI report.

Uptrend in yield was observed in instruments with outstanding Term to Maturity (TTM) between 3.25 years and 19.34 years.

Yet, we think Inflation rate is hardly the driver of yields at current high levels (nor should it be), given that the NBS’ Core inflation (all items less farm produce) remains below short term rate in the economy, while the impact of high base effect should typically begin to force inflation rate downwards in 2017 bar significant external shocks.
Rather, we believe the yield premium over Core Inflation is being induced by an ultra-tight monetary policy to compensate for FX rate movement and illiquidity risks; which are subsisting factors that will continue to keep inflation expectation high and also priced into debt securities valuation.