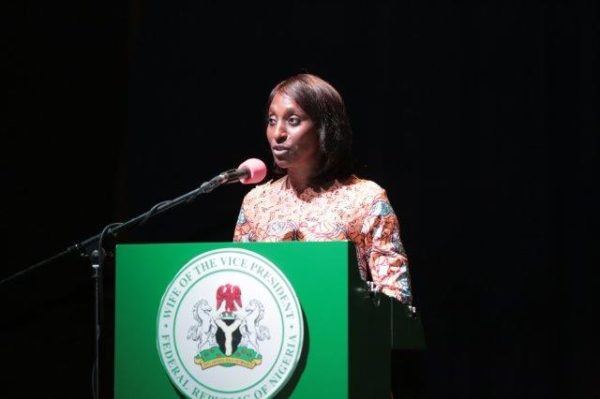 Wife of the Vice-President, Mrs. Dolapo Osinbajo has said that government alone cannot fight poverty and crime in the country, adding that well meaning individuals could also play a major role in the reduction of poverty and crime rates in the society through empowerment programmes.

Mrs. Osinbajo made the remark while speaking at the graduation ceremony of more than eight hundred Imo people who were trained to acquire various skills by the Mrs. Osinbajo Pet Project, “PROJECT AYODELE” at the Imo State International convention Centre, Owerri, stressing that empowering those who need empowerment in our society would definitely reduce poverty and crime in the system.

She said, “the Foundation PROJECT AYODELE was set up in memory of my mother who died four years ago. So, this foundation is an honour to her memory. Training people on skills that can be turned speedily into cash was a move to empower our people and stop poverty and crime in the nation.”

She continued, “I have come to Imo state to celebrate men and women that have graduated today under the auspices of, PROJECT AYODELE. With the training and the skills acquired, those involved can take care of themselves. We did not know many years ago when we started the project, that I will end up as the wife of the Vice-president. And I didn’t know too that I could be in Imo for that.”

According to her, “where you are today have nothing to do with where you are going tomorrow. I pray for the participants. Whatever they have learnt would take them to a higher height. I was just watching the video about the 200 homes built for indigent women by the wife of Imo governor, Mrs. Nkechi Okorocha. I congratulate her for that feat. The Imo governor’s heart is large that it continues to speak so plainly from. ”

Governor Rochas Okorocha in his speech at the colourful event wondered why Nigerians should be singing the song of poverty amidst wealth and knowledge. We have 200 million Nigerians and over one million millionaires and billionaires. If we make a law that every billionaire or millionaire must engage or empower 200 people, one will discover that the 200 million will be self sufficient and poverty will disappear.”

Okorocha continued, “If every bigman in Nigeria builds something that will create Job, there won’t be poverty.” In Nigeria poverty claim does not reflect practical realities. I am happy because the wife of the Vice-president has created more than 800 direct jobs in Imo on her own. If every politician does that, we will be hiring labour from outside. This is why I am not worried about the corruption that is internal but the one that is external because it allows the resources of the land to go to foreign countries.”

His words, “Woe betide all leaders who stock their money abroad to develop other people’s country while they live their people in penury. That is the corruption that is bad for our country. If we can invest the resources in this country, no matter the source, there will be no poverty in the country. I commend the wife of the vice president for the initiative.”

The anchor woman of the programme in the state, and wife of Imo governor, Mrs. Nkechi Okorocha said the wife of the Vice-president had done the state a great favour by training more than 800 indigenes of the state to acquire various skills, adding that the exercise was a direct complement to the Job, Job creation mantra of the Imo state government.

Mrs. Okorocha urged the beneficiaries to also transfer what they have learnt to others so that poverty will be eradicated in the state and the state would be better for it, thanking the wife of the President Aisha Buhari for the support and love she has continued to show the wives of the governors in the country.

The wife of the governor of Abia state, Mrs. Nkechi Ikpeazu and her Enugu state counterpart, Mrs. Monica Ugwuanyi attended the event.

N5tr Debt Recovery a Challenge to All Nigerians – AMCON