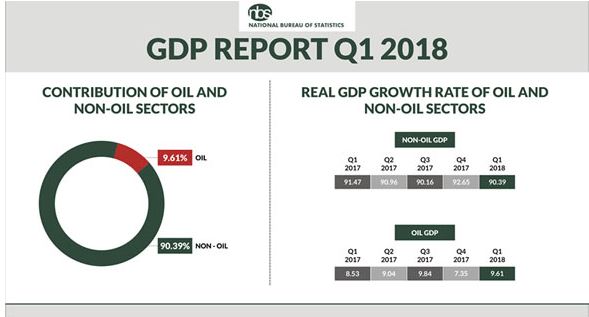 The GDP report which shows Nigeria’s economic performance in 2018 was published on Tuesday by the National Bureau of Statistics and the results were firmly in line with our expectations. Real GDP expanded by an improved 2.4% Y-o-Y in Q4:2018 (Q3:2018 – 1.8%), the strongest quarterly growth since Q3:2015.

This is in sharp contrast to the previous year when growth was almost entirely oil driven. In the oil sector, growth decelerated to 1.1% from 4.7% in FY: 2017 as average oil production increased only marginally by 20,000 bpd to 1.92mb/d.

Agriculture Growth Slows to Weakest in 25 years
We saw a soft recovery in growth in the agriculture sector which expanded by 2.5% Y-o-Y in Q4:2018, above an average growth rate of 1.5% in the previous two quarters. This was mainly supported by crop production (90.0% of Agriculture GDP) which grew at 2.5% Y-o-Y due to better harvests in the latter part of the year.

However, this does not suggest that the conflicts that affected output in the middle-belt and some parts of Northern-Nigeria have been resolved. We believe security issues will limit current growth prospects below historical quarterly growth rate of 3.8%.
In full year terms, the agriculture sector slowed considerably as the growth of 2.0% in FY:2018 was the weakest in 25 years, compared with historical average growth of 7.6% between 1998 and 2017.

Manufacturing Growth Reaches Positive Territory in FY: 2018
The manufacturing sector advanced by a stronger 2.4% Y-o-Y in Q4:2018, a modest improvement over 1.9% and 0.7% in Q3 and Q2:2018 respectively. This was partly driven by other manufacturing sub-sectors with a share of 23.3% of total manufacturing GDP which grew by 4.2% Y-o-Y.

Elsewhere, growth was positive but slightly weaker in major sub-sectors such as Cement (+1.0% Y-o-Y), Textile, Apparel & Footwear (+1.2%) and Food, Beverage and Tobacco (+2.2%).
In FY:2018, manufacturing sector growth which had persisted in the negative growth since 2015 turned positive at 2.1% (2017: -0.2%). We attribute this positive performance to exchange rate stability which ensured access to imported inputs as well as recovering consumer spending.

ICT Growth Drives Strong Rebound in Services
The services sector (52.6% of GDP) sustained a robust performance in Q4:2018, with growth advancing to 2.9% Y-o-Y from 2.6% in the previous quarter.  This was helped by an impressive outing yet again in the information and communication sub-sector which grew by 13.8% Y-o-Y, slightly better than 12.1% in the previous quarter. In other large sub-segments, the performance was mixed.

In Trade, growth remained negative, although it improved at -0.6% (2017: -1.1%). Meanwhile, in the real estate sub-sector, growth slid deeper into the negative territory at -4.8% (2017: -4.3%).
Overall, we believe a slight improvement in consumer spending lifted services growth. However, sub-sectors such as real estate continue to be held back by structural issues such as high cost of credit for mortgage, FG’s failure to incentivise wide-scale housing supply by the private sector and overdue reforms pertaining to land administration.

Real GDP Growth Expected at 2.5% in 2019
In line with our 2019 economic and financial markets outlook titled “On the Precipice!”, we note that our growth expectation is unchanged at 2.5% for the base case. This will be supported by a continuous but slow recovery in agriculture and stronger performance in manufacturing and services.

In the oil sector, while production in the 200,000 bpd Egina field should lead to a faster expansion, we expect moderate growth due to OPEC output cap.

The risks to our GDP growth forecast in the base case are sub US$60.0/b oil prices, production disruptions that reduce output below 2.0mb/d in the Niger Delta, and a deterioration of security conditions in the country.