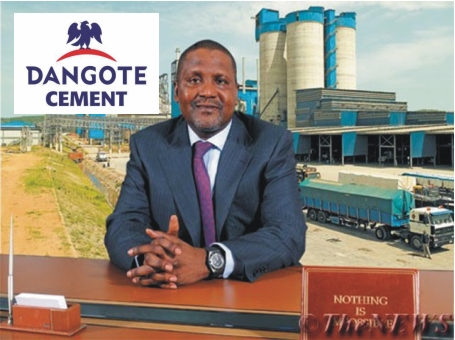 The results presented herein reflect the first-time consolidation of African projects and operations at Sephaku.

Including Other Income, operating profits (EBIT) rose by 15.0% to ₦118.9bn (2010: ₦103.4bn) at a margin of 50.4%, slightly down on the 51.0% achieved in 2010 because of the additional costs associated with Sephaku, higher fuel costs for LPFO and diesel, higher import tariffs and the impact of the Group’s decision to cut cement prices in late June.

In the fourth quarter, the Group made a provision of ₦800m to replace damaged trucks and a further provision of ₦700m against doubtful debts. In addition, owing to gas supply issues, a higher proportion of LPFO was used at Obajana, with an impact on profitability of about ₦3bn. In addition, net pricing was somewhat lower in the final quarter because of provisioning of ₦2bn for the lifting bonus.

The Group continues to benefit from Pioneer Tax Status and has recognised a net tax credit of ₦7.6bn (2010: credit of ₦5.3bn) related to its investment programme. Provision for taxation is after considering a credit of ₦9.87bn of deferred tax benefits recognised during the period. As a result, net profit was ₦125.9bn, 19.6% up on 2010 (₦105.3bn).

The balance sheet reflects the first-time consolidation of African projects and operations at Sephaku.

Fixed assets increased by ₦123.8bn to ₦433.9bn, mostly as a result of the consolidation. Capital work in progress increased by ₦113.9bn and the Group invested ₦9.2bn in new trucks and ₦5.1bn in plant. The Group wrote off vehicles to the value of ₦2.3bn during the year, representing costs and accumulated depreciation on the trucks destroyed in Gboko plant during the community crisis and trucks decommissioned during the year in Obajana plant, which were considered to be damaged beyond repairs.

The consolidated balance sheet shows fixed assets higher by ₦86.95bn on account of bringing in the capital work in progress on various African projects. The Group balance sheet has recognised goodwill arising on consolidation of the Group’s investment in Sephaku of ₦9.05bn.

On 21 March 2011, Dangote Industries Limited transferred its interests in thirteen African Projects to Dangote Cement Plc at nominal value. ₦45.147 billion, which was the total cost incurred by Dangote Industries Limited as at that date has been recognised as payable by Dangote Cement Plc. ₦45 billion was restructured as long term loan and the remaining balance was regarded as intercompany current account. The long-term loan is payable in five years with a two-year moratorium for both interest and

principal and takes effect from 1 July 2011. It attracts 10% annual interest.

Long term receivables of ₦70.23bn in the standalone balance sheet represent the expenditure on African projects.

Cash generation was strong; including ₦247.7bn collected from customers and ₦87.4bn paid to suppliers and employees, the Group generated net cash of ₦164.1bn from operations. The Group invested ₦148.4bn during the period, including ₦128.9bn devoted to Fixed Assets and Capital Work in Progress, ₦27.6bn of investments in Sephaku Cement Company inSouth Africa. This represents almost 90% of cash generated from operations. The Group paid ₦34.8bn in dividends during the year.

Obajana is Dangote Cement’s largest plant, contributing 59% of the Group’s sales and 79% of its EBITDA.

As previously reported the 5 million tonne expansion of Obajana has taken longer than expected but the site now has 10.25 million tonnes of capacity fully operational and is expected to reach high levels of utilisation in the next few months. The new capacity is eligible for Pioneer Tax Status.

Throughout its working life, Obajana has supplied many regions ofNigeriaincluding the key markets ofLagosand the South West. However, with the new lines at Ibese now providing 6 million tonnes of capacity less than 100km fromLagos, the Group will begin to redistribute cement from Obajana into other regions where its extensive distribution network will provide a competitive advantage. The Group believes this may have the effect of revealing previously unsatisfied demand in the country, thus creating markets where little or no cement was sold before.

Construction of a fourth line, of 3mt, will begin this year.

Gboko produced 1.7 million tonnes in 2011, slightly down on the 1.8 million tonnes achieved in 2010, at the utilisation rate of 58%. As reported in November, production during the first half of the year was affected by a shortage of furnace oil (LPFO) that resulted in frequent kiln stoppages. The fuel shortage was caused by a temporary lack of refinery production inNigeria. The Group has since negotiated long-term supply contracts and stockpiled fuel to mitigate any future risks to production from LPFO shortages. In addition, the Group is actively examining the feasibility of gas-fired production at the plant as an alternative to fuel oil.

The Group plans to increase the capacity of the Gboko plant from 3mtpa to 4mtpa across its two lines. This will be achieved by a programme of upgrades that is expected to be completed by the middle of 2012.

The 6 million tonne plant at Ibese entered commercial production in early January and made no contribution to 2011 sales. Its ramp-up is proceeding well and the plant has been increasing shipments steadily, with more than 10,000 tonnes being dispatched on a daily basis in late March 2012 – a daily utilisation rate of about 60%.

The Group was honoured by the presence of His Excellency Dr. Goodluck Ebele Jonathan, GCFR, President of the Federal Republic of Nigeria, who formally commissioned the plant in February 2012. With the opening of Ibese, Dangote Cement transformedNigeriainto a country capable of self-sufficiency in cement production, with significant benefits for its economy.

The plant is gas fired, with fuel being supplied along a 25km pipeline. As such, the Group expects Ibese to achieve levels of profitability similar to those achieved at Obajana. Back-up fuel supplies include LPFO and, soon, coal for its kilns, with diesel back-up for its power plant.

As with Obajana’s existing and new capacity, Ibese is eligible for Pioneer Tax Status – in its case for five years from 1 January 2013.

The plant is ideally located in the South West of Nigeria, close toLagosin the country’s largest market for cement. Furthermore, given its proximity to the coast and also to neighbouringBenin, the plant will be in a good position to export any surplus cement production.

Now that self-sufficiency has been reached inNigeria, thanks to the investments the Group has made in new capacity, Dangote Cement has ceased importing and is advancing its longer-term strategy to export any cement that is surplus to Nigerian market needs.

Work is already underway to convert two of its terminals inLagosfor the export of clinker and bulk cement by the end of 2013. In the meantime, the Group is capable of exporting by road to neighbouring countries, particularly as the Ibese plant is situated close to the border withBenin.

Sub-SaharanAfricais experiencing strong economic growth that is driving the need for substantial infrastructure investment. Dangote Cement aims to become the leading producer of cement across Africa and the Group is committing more than $2.5bn to build around 19mtpa production and import capacity across a further 13 countries where market conditions are favourable.

Contracts have already been signed on the planned manufacturing plants, totalling around 14mtpa in most cases with mobilisations to sites expected in 2012. With the current production schedule, which is subject to change, the Group expects all of its planned production facilities to be completed by the end of 2014.

Import terminals with total capacity of more than 4mtpa are also planned with site mobilisations expected this year. The terminals are expected to be completed by the middle of 2013.

The 1.5mtpa plant inSenegalis nearing completion and the Group anticipates production to commence in the next few months. Plans to power the plant fromSenegal’s grid had to be abandoned when the power supplier informed the Group it could not provide sufficient power, and so the Group has opted to build a coal-fired power station of its own.

As has been widely reported, disputes about land rights inCameroonhave delayed the start of work on a new clinker grinding plant in Doula, but the Group is confident that these disputes will be resolved by the Government of Cameroon and work is expected to begin shortly thereafter.

“Dangote Cement achieved strong organic growth in revenue and profits, even before our new capacity was commissioned.

“We have made substantial investments to expand our capacity and bringNigeriato self-sufficiency in the production of cement. Our new plant at Ibese and the expansion at Obajana are expected to deliver profitable returns for shareholders in the coming years. Furthermore, we have ended the importation of cement at what, for us, were much lower margins than we are achieving at our plants.

“The Group has ambitious plans for growth that include more capacity inNigeriaand expansion intoAfrica’s growth economies, where investment in infrastructure and housing will be major government priorities for many decades.

“In order to maximise these opportunities on behalf of our shareholders, the Board has taken the strategic decision that during this expansion phase it is preferable to maintain the strongest balance sheet possible and focus on funding this expansion from cash resources.

“We believe this is the best strategy to increase shareholder value over the coming years and are confident that investors will continue to reap good rewards as our expansion programme transforms Dangote Cement into the leading supplier in a continent with huge potential for growth.”

Thanks to the investments Dangote Cement has made in building new capacity,Nigeriahas become self-sufficient in cement production with substantial benefits for its economy. The new capacity is expected to achieve high rates of utilisation later this year and the Group is already preparing for a time whenNigeriabecomes a key exporter to other African countries. Plans to export surplus cement are well underway, both by road and through export terminals being built inLagos.

Dangote Cement has a clear strategy to become the leading cement supplier in a rapidly growing continent where high investment in infrastructure and housing will be major government priorities in the coming decades. We are confident that our shareholders will reap the benefits of the strategy we are pursuing to build a world-class company serving the needs of Africans as their prosperity increases. We thank our staff for their fine efforts and thank our shareholders for their faith in our vision.