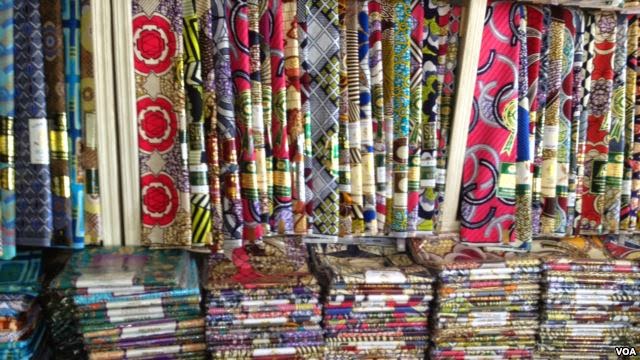 Nafiu Badaru, a junior civil servant in northern Nigeria’s biggest city Kano, doesn’t make much money and it takes some cash to look good so he tends to buy Made-in-China fabric.”A piece of high-quality brocade (cloth) costs around 10,000 naira ($50, 47 euros), which is way too expensive for me,” he told AFP.

“With the same amount of money, I can buy six pieces of cheap Chinese brocade which cost only 1,500 Naira a piece and still keep some change.”The proliferation of Chinese-made textiles is a boon for consumers like Nafiu, with Kano and the wider North struggling with unemployment and economic constraints.

But traders in the city — a centre of weaving and textile manufacturing dating back centuries — say such cheaper imports have been disastrous. Factories have shut down and trade in home-spun fabrics has dwindled, prompting calls for foreign investment within Nigeria rather than cheap, mass importation, as well as better regulation.

Fatuhu Gambo’s business is one of many in dire straits. For the past two weeks he has not sold a single fabric in his shop in the Kantin Kwari textile market — the largest in West Africa.”The Chinese have effectively edged us out of business, leaving us with nothing but huge debts and heaps of goods in our shops,” he said.

Talk in the market — a colourful rabbit’s warren of shops and stalls that draws traders from Nigeria, Niger, Chad, Cameroon to Mali and the Central African Republic — is of unfair competition.”The Chinese have taken over the importation and distribution of textiles in Kano and now they are into retail trading, which is putting our traders out of business,” said traders’ union head Liti Kulkul.

Protests & CrackdownsThe troubles began a decade ago when Chinese textile merchants started the massive importation of textiles to Nigeria after Africa’s most populous nation opened its doors to foreign trade.

The World Trade Organisation (WTO) deal gave the Chinese unfettered access to Nigeria’s textile market, although Nigerian laws prohibit
foreigners from retail trading.Traders talk of locals being recruited to conduct business on behalf of the Chinese in return for a cut of the profit.

There have been occasional crackdowns, like in May 2012, when immigration officials arrested and deported 45 Chinese nationals over retail trading after repeated complaints.Earlier this month, customs officials arrested four Chinese traders for smuggling mass produced fabrics and sealed 26 warehouses containing goods on which import duties had not been paid.

Hundreds of textile dyers then staged street protests against what they view as a Chinese takeover of their trade that threatens to put 30,000 artisans out of business.The dyers, many of whom still use methods dating back more than 500 years, accused the Chinese of faking their products and selling inferior cloth at a fraction of the price.

Enforcement & Regulation The situation is just one aspect of the struggle facing Nigeria’s crude-dependent economy, which has been hit hard by the slump in global oil prices since mid-2014.There is little domestic manufacturing to speak of, forcing goods from cars to foodstuffs to be imported.

The local Muslim religious leader, the Emir of Kano, Muhammadu Sanusi II, met China’s Ambassador to Nigeria at his Palace recently and called on Beijing to set up factories in the country.

“Our over-reliance on foreign products is hurting our economy and the only way to stop this trend is to tackle the problems in the manufacturing sector,” said Sanusi, a former central bank governor.Sa’idu Adhama, a former textile factory owner, said Nigerian traders cannot compete with their Chinese counterparts, who can get bank loans at single digit rates over a longer term.

“The Chinese are here legally, so we can’t send them packing but we can regulate their trading,” said Adhama, who studied in China in the 1970s.
That could include quotas, stricter enforcement of import regulations, duties and taxes as well as fuel subsidies to boost local manufacturing and help home-grown businesses, he added.

Long-term investment in the power sector to stabilise the currently woeful electricity supply could also revive moribund factories, he said.In the meantime, the debate is immaterial to people like Badaru, with cheaper foreign imports satisfying demand for a growing consumer society, whether it is clothing or electronics.