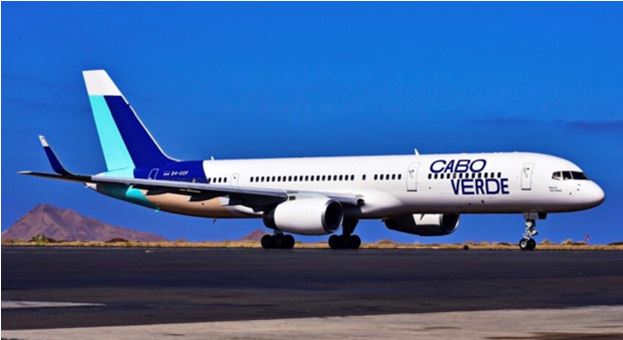 Cabo Verde Airlines, the Cape Verdean airline, will start flying to Lagos, Nigeria, from December 9, 2019.
After announcing flights to Luanda (Angola, December 9th), Porto Alegre (Brazil, December 11th) and Washington DC (USA, December 11th), Cabo Verde Airlines now announces a new route for the Winter 2019-2020.
The connection between Sal and Lagos will be operated five times a week, on Mondays, Tuesdays, Thursdays, Saturdays and Sundays, with a Boeing 757, with 161 economy class seats and 22 executive seats.
The inaugural flight is scheduled for December 9th, departing from Amílcar Cabral International Airport (Sal) at 20:50 local time and arriving at Murtala Muhammed Airport (Lagos) at 02:10 local time.
All flights will connect to Sal Island, Cabo Verde Airlines’ international hub, and will make connections to Lisbon (five times a week), Washington DC (three times a week) and Boston (once a week), as well as to the airline’s destinations in Brazil – Salvador, Porto Alegre, Recife and Fortaleza.
In addition to the hub connections on Sal Island, Cabo Verde Airlines’ Stopover program allows passengers to stay up to 7 days in Cabo Verde and thus explore the various experiences on the islands, at no additional cost for airline tickets.
The new route strengthens the company’s operations within the African continent, as well as the connection between Africa and Europe and North and South America as part of its mission to connect these four continents