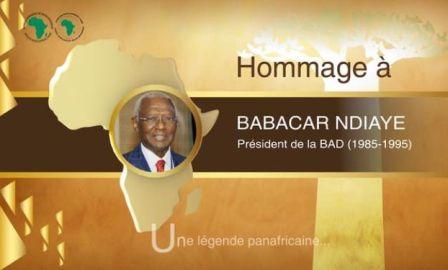 Babacar Ndiaye, the Bank Group’s fifth elected President, who served two terms between 1985 and 1995, passed away on July 13, 2017 in Senegal.
“Goodbye, Papa, farewell to the ambassador for Africa’s development, rest in peace.” In an intensely emotional tribute, the President of the African Development Bank (AfDB), Adesina Akinwumi, opened a ceremony honouring Babacar Ndiaye at the organisation’s headquarters in Abidjan.
Adesina announced that the AfDB headquarters auditorium will from now on be named Babacar Ndiaye Auditorium.
Babacar Ndiaye, the Bank Group’s fifth elected President, who served two terms between 1985 and 1995, passed away on July 13, 2017 in Senegal.
With Ndiaye’s widow and several children in attendance, as well as former AfDB President Kantinka Dr Kwame D. Fordwor, members of the Senegalese and Ivorian Governments, representatives of the diplomatic corps, and active and retired AfDB staff members. Adesina fondly recalled Babacar Ndiaye’s complete and passionate commitment to the development of Africa.
“He was an AfDB icon, he was a father and mentor to every one of us, and emphatically launched the career of the Bank Group’s current President. He inspired us. In losing him, Africa has lost one of its best sons.”
President Adesina underlined the personal ties between him and his predecessor, recalling that he knew Ndiaye when he worked for the West Africa Rice Development Association (WADRA), which was then based in Bouaké, Côte d’Ivoire.
“Babacar Ndiaye was charismatic, and left an indelible mark on our continent. His legacy is vast, because he always saw the big picture. He was quite simply magnificent,” Adesina stated.
He added, “During the campaign for the AfDB presidency, I naturally went to see him in Dakar. He welcomed me warmly. I took the opportunity to tell him about my vision for the High 5s. He agreed right away, and told me, ‘That’s what Africa needs to transform itself.'”
Arriving at the institution in 1965 as part of the first group of African managers, Ndiaye climbed the organisational ladder to become Division Chief, Director, Vice-President for Finance, and then President in 1985. Babacar Ndiaye was the first AfDB President to be re-elected to a second term of office.
Under his leadership, the pan-African financial institution obtained its first Triple-A rating in 1984.
The former President was the force behind the increase in the Bank’s capital in 1987, which jumped from approximately US $6 billion to $23 billion, a 200% increase, after approving the process of opening the Bank’s capital to non-African countries. He was also responsible for bringing the Bank into the international financial market.
“Babacar Ndiaye accomplished tremendous things for the AfDB and for Africa. He always advocated for excellence. He made the AfDB a credible and respected institution internationally,” stated Donald Kaberuka, former AfDB President (2005-2015), in a message read on his behalf by Victor Oladokun, AfDB Director for Communication and External Relations.

Beyond his complete commitment to the Bank’s success and providing it with a solid foundation, Babacar Ndiaye helped establish major pan-African institutions, such as the African Import-Export Bank, Afreximbank; Shelter Afrique; and the African Business Roundtable.
Representatives of these organisations were specially sent from Cairo, Lagos and Nairobi to attend the tribute ceremony on Thursday.
“Without Babacar Ndiaye, African industry leaders such as Aliko Dangote or Michael Ibru would undoubtedly not be where they are today. Babacar Ndiaye invested his faith and perseverance in Africa’s business community. We will be eternally grateful to him,” said Bamanga Tukur, President of the African Business Roundtable.
Christopher Edordu, founding President of Afreximbank, highlighted Ndiaye’s visionary approach, which allowed him to look beyond the era’s Afro-pessimism and embrace opportunities to finance African businesses.
“It took more than six years to establish Afreximbank. When others abandoned it, Babacar Ndiaye persevered and had patience. He firmly believed in the future of African trade at a time when that belief was not widely shared. Seeing what we have become today, we have to recognize the fact that he was a true visionary,” Edordu explained.
It was not the only time that the AfDB’s fifth elected President was proven right when confronted with naysayers. At a time when housing was not yet central to urban development in Africa, he encouraged the creation of Shelter Afrique, an organisation dedicated to financing affordable housing on the continent.
According to Edmond Adikpe, Shelter Afrique’s regional representative, “Babacar Ndiaye knew how to anticipate. He understood early on that Africa must address the problem of housing. At Shelter Afrique, we are eternally thankful to him for everything he did during our creation and evolution.”
The room was filled with emotion as one speaker followed another, with the audience warmly applauding their words of praise for Babacar Ndiaye, who remains the only President in AfDB history to have risen through the ranks of the organisation.

“He was installed as President in 1985 at the Abidjan Congress Centre in the presence of then Ivorian President Félix Houphouët-Boigny, who held the African Development Bank in high esteem,” recalled Paul Morisho Yuma, former AfDB Secretary General, drawing a standing ovation from the audience.

“Senegal is Proud of You”

Although he devoted his life to Africa, Babacar Ndiaye never forgot Senegal, his country of origin. According to the Senegalese Budget Minister, Birima Mangara, AfDB Governor for Senegal, who flew in from Dakar to attend this ceremony, Ndiaye contributed significantly to the development of bilateral cooperation between his country and the Bank. “Between 1972 and now, the AfDB has invested close to 1,400 billion CFA francs in Senegal. We owe that to all of you here, but in particular to Babacar Ndiaye.
“Senegal is proud of you as a son. Babacar Ndiaye is not gone; he is still present in the depths of Africa. We hear his breath in an Africa on the move,” added the Senegalese Budget Minister, paraphrasing the poet Birago Diop.
In attendance, Ndiaye’s widow, Marlyne Ndiaye, nodded her head in agreement, with tears in her eyes. Arriving in Abidjan in 1965, Babacar Ndiaye developed a special relationship with Côte d’Ivoire, home of the Bank’s headquarters. No fewer than three Ivoirian Ministers were present in the AfDB auditorium this week.
“He was a friend of Côte d’Ivoire. We all miss Babacar Ndiaye. President Alassane Ouattara misses him, having known him well and greatly appreciated him. He was a roving ambassador for African development,” agreed François Albert Amichia, Minister of Sports and Leisure, who led the Ivorian Government delegation.

His Memory Lives On

Alassane Ndiaye, son of the deceased, spoke on behalf of his family. He first thanked the Bank for taking the initiative to hold the ceremony to honour and pay tribute to his father. “The entire family is proud of and thankful for this ceremony. What you have done today touches us deeply and we thank you from the bottom of our hearts,” said the Ndiaye family’s spokesman, in a voice filled with emotion.
He urged those present to pursue the trail blazed by his father.
“He wanted the best for Africa. He believed in and loved the idea of a better Africa. Let’s continue to work for a better future for our continent. That would be the best and most unique way to perpetuate his hopes and his memory,” continued Alassane Ndiaye.
“Replacing darkness with light, well-nourished and healthy children, free flow of goods, people and ideas throughout the continent, and restoring hope to the hopeless – these were the ideals to which President Babacar Ndiaye dedicated his life. The work to realize these dreams continues in the High 5s,” declared AfDB Senior Vice-President Charles Boamah at the ceremony’s conclusion.
Last July, a high-level delegation from the Bank, led by Charles Boamah, along with Vice-Presidents Alberic Kacou and Amadou Hott, Acting Vice-President, Finance, Hassatou N’Sele, and Director of Special Projects Sipho Moyo, attended Babacar Ndiaye’s funeral in Dakar.