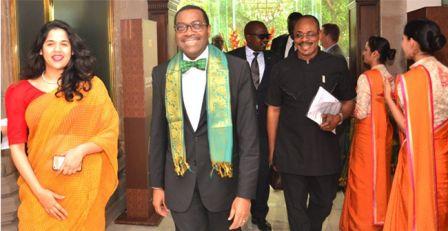 The President of the African Development Bank Group (AfDB), Akinwumi Adesina, arrived in New Delhi on Thursday, March 30, 2017, to begin a four-day official visit to India aimed at improving relations between the Bank and India, and the country’s ties with Africa.

Adesina and members of the delegation were received at New Delhi’s Indira Gandhi International Airport by senior Indian Government officials lead by Rishikesh Singh, Director, Multilateral Institutions Division, Department of Economic Affairs, Ministry of Finance; and the Dean of African Diplomatic Corps in India, Ambassador Alem Tsesaye Woldemariam of the State of Eritrea.

They were to attend a meeting with the African Diplomatic Corps in India during the day followed by a dinner hosted by the Export-Import Bank of India (EXIM Bank) later in the evening.

During the visit, Adesina and his team are expected to hold bilateral talks with Prime Minister Narendra Modi and Finance Minister Arun Jaitley on how to strengthen cooperation between the Bank and India. The parties will also discuss the forthcoming Annual Meetings of the Bank Group to be held in Ahmedabad in the State of Gujarat from May 22-26, 2017.

The visitors will attend an interactive session on the Bank’s High 5 development priorities, confer with the Managing Director of the Export-Import Bank of India at the India EXIM Bank Regional Office, and participate in the opening ceremony of the 2nd Annual Meeting of the New Development Bank (NDB) set up by the BRICS countries (Brazil, Russia, India, China and South Africa) for infrastructure development.

Adesina and his team flew to Ahmedabad on April 2 to assess the state of readiness of the Mahatma Mandir Conference Centre in Gandhinagar, which is the capital of Gujarat State and the main venue of the 2017 Annual Meetings.

This will be followed by a tour of Toran Gandhi Ashram, home of India’s pre-eminent independence leader, Mahatma Gandhi.

The visit will close with a press conference to be addressed by Adesina and by the Chief Minister of Gujarat State, Vijay Rupani.