• ICT engineer turned career diplomat endorsed as ‘safe pair of hands’ to steer ITU through its next four years.

ITU’s 19th Plenipotentiary Conference roundly endorsed Houlin Zhao of China as its next Secretary-General. Zhao will take office on 1 January, 2015 for a term of four years, with the possibility of re-election for one additional four-year term.

The election took place in Busan, Republic of Korea, during the Plenary session of the PP-14 conference.

Addressing the conference after the vote, Zhao told some 2,000 conference participants from around the world that he would do his best to “fulfil ITU’s mission, and, through our close cooperation, ensure ITU delivers services to the global telecommunication and information society at the highest level of excellence.”

Zhao is a respected telecoms engineer with over 30 years’ experience in the international environment. He currently serves as ITU Deputy-Secretary-General (DSG), a post he has held since January 2007 after being elected by ITU’s 2006 Plenipotentiary Conference in Antalya, Turkey. He was re-elected for a second four-year term at ITU’s 2010 Plenipotentiary Conference in Guadalajara, Mexico.
In his two terms as DSG, Zhao has charted a steady course for the organization, pioneering new initiatives to expand ITU membership to the global academic community, and proactively implementing efficiency improvements in human resources management and financial administration.

He is well-known and well-regarded by the global ICT community, both for his technical expertise and his commitment to digital inclusion for all.

Prior to his role as Deputy, Zhao served two elected terms as Director of ITU’s Telecommunication Standardisation Bureau (TSB), the part of ITU most concerned with developing global technical standards to ensure worldwide interoperability of information and communication equipment and software.

Before that, he was for 12 years a Senior Counsellor with TSB, and its former incarnation, CCITT.

Born in 1950 in Jiangsu, China, Mr. Zhao graduated from Nanjing University of Posts and Telecommunications, and holds an MSc in Telematics from the University of Essex in the UK. 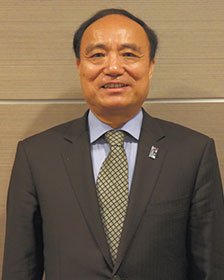 From 1999 to 2006, he served as Director of ITU’s Telecommunication Standardisation Bureau (TSB). During his term of office he spearheaded the introduction of new efficiency measures to improve ITU’s standards-making environment and strengthen its promotion.
He also enhanced the strategic partnership between Member States and Sector Members, while initiating and maintaining good relationships with industry members. Under his leadership, ITU enhanced its level of international co-operation with other standards development organisations, and was instrumental in helping bridge the standardisation gap between developing and developed countries.

From 1986 to 1992, Zhao was a senior staff member in the then CCITT, and from 1993-1998 in TSB. Among his responsibilities as Counsellor for ITU-T Study Groups, he was Co-ordinator for co-operation with other international technical bodies, including ISO and IEC.

Prior to joining ITU, Zhao served as an engineer in the Designing Institute of the Ministry of Posts and Telecommunications of China, taking an active role in his country’s expert meetings on telecommunication standards and national plans, as well as participating in ITU’s technical Study Group meetings as a Chinese delegate. He contributed important articles to a number of prestigious Chinese technical publications, and in 1985 was awarded a prize for his achievements in science and technology within the Ministry of Posts and Telecommunications.