The World Bank in its report entitled “Migration and Development: A role for the World Bank Group” said remittances to developing countries have tripled public development aid to $432 billion in 2015.

Despite migration affecting welfare of migrants, their households’ as well that of the community they left, and that of host country, it has a few advantages of which benefits of remittances and their associated sending-reception fees. The global impact of migration on migrants’ home countries is usually significant and positive, the report states. 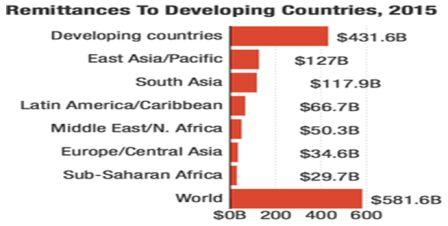 Remittances are one migration’s main advantages, for home nations, since migrants often send part of their revenues to their families back there.

Unlike public aid which is which flows through official institutions, remittances are directly sent to the families of migrants and thus meet the needs of beneficiaries more efficiently. Also, in opposition to private capital inflows which are highly cyclical, remittances are often stable and are insurance for households affected by economic crises and natural disasters.

For example, in 2013, remittances to India exceeded its IT services exports. In 2015, remittances to Egypt were four times greater than revenues generated by the Suez Canal. In most small countries and insular countries like Tajikistan, Nepal, or Haiti, remittances represent a third of GDP.

“Remittances are a great way of sharing prosperity between different places. They can reduce the level of poverty by directly augmenting the incomes of poor households,” the report indicates.