The Anti-corruption War: How Far Can Buhari Go?

From all indications so far, President Muhammadu Buhari is proving to be a man of his word. Indeed, it is worth recalling that throughout the period he contested for the presidency over the years and the 2015 electioneering campaign in particular, waging war on corruption was one of his key policy points.

He continued to hammer on the need to kill corruption before it kills Nigeria as a nation. Looking back during his military days as Head of State (December 1983-August 1985), fighting corruption had always appealed to Buhari as one of the ways to move the nation forward. Then, he also fought politicians of the Second Republic, sending many of them to jail after recovering huge sums of public funds allegedly stolen by them while in office.

When Buhari won the 2015 presidential election on the platform of All Progressives Congress (APC), many people thought, erroneously, as we have now seen, that Buhari The Lion of 1983-1985, will not be Buhari The Lion of 2015. They predicated their doubts on the passage of time and age.

Buhari today is much older than what he was in his first presidential sojourn as Military Head of State. Fortunately for Nigeria, Buhari is
still Buhari. Without mincing words, rampant corruption has been a major element and reason why Nigeria has failed to develop socially and economically in line with its God-endowed resources. 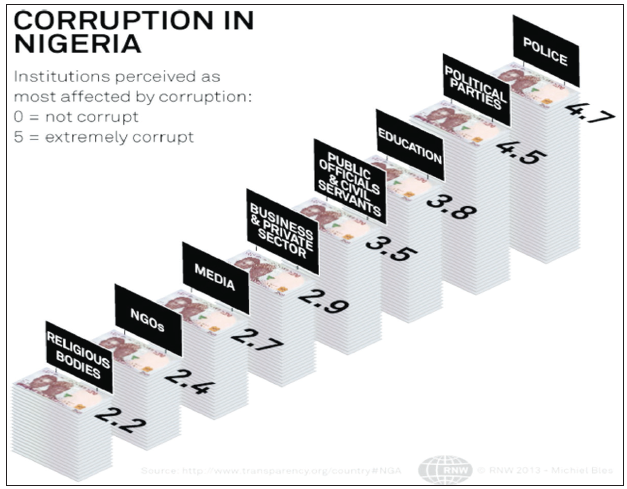 It has been proven with convincing evidence over the years, that some of our fellow citizens who were privileged to be in positions of authority were using their positions to siphon public funds at their disposal for the benefits of themselves, families and friends, leaving the vast majority of Nigerians in abject penury.

And it is not only Nigerians that have raised voices against rampant graft in the country; concerned foreigners, both in Africa and the western world, have equally called for a change of heart by leaders of Nigeria and spirited campaign against official sleaze.

Today, Nigeria is gradually ramping up the war on corruption, in a manner that has already attracted widespread support from a cross- section of Nigerians and foreigners as well. From NNPC to civil servants, to certain persons in the immediate past administration to probe of the sale of public enterprises like NITEL/MTEL, it is no longer in doubt that the war on corruption is on in Nigeria.

In my considered opinion, this war is in public interest and should remain so. It is in our collective interest that the resources of the country should be utilised judiciously to develop the nation and make life much better for the people of Nigeria. It is wrong and will forever remain wrong for few elements in our midst to corner such public resources for their private use only, to the detriment of other citizens. Public resources should be put to public use for the benefit of the public.

As we are witnessing the current campaign against graft, a recurring and growing issue is how far the Buhari administration will go to recover allegedly stolen public funds and bring the perpetrators to justice. It is not in doubt that majority of Nigerians support the on-going effort to rework the public finance system of the country.

However, many more Nigerians will line up behind the effort if the campaign is impartial, apolitical and more importantly, produce positive results in terms of funds recovery and jail terms for the convicted offenders. The question of how far Buhari can go is in respect of rising dissenting voices in the polity, especially from the opposition of what they call ‘selective’ war on corruption, targeting only members of the opposition party and leaving alleged corrupt persons in the ruling party, to not only keep and enjoy their alleged loot, but also parade the corridors of power as government appointees and officials.

In this war, there should be no The Anti-corruptionWar: August 24-30, 2015 room for Untouchables! It is commendable that Buhari himself has said it openly that nobody can influence him on the anti-graft war. We believe him on that promise until proved otherwise.

Accordingly, the allegation of selective justice in the anti-corruption war should be handled seriously by the government on its merits-not
every allegation has merit and not every allegation is without merit.

It is important for the government to ensure that the anti-graft agencies: EFCC and ICPC are not teleguided on who to arrest and prosecute and who not to touch. If that happens and it becomes obvious to Nigerians, that would mean withdrawal of public support for the anti-graft campaign and loss of credibility and confidence in the entire process.

Accordingly, it is imperative, in the public interest and interest of the federal government, that both the EFCC and ICPC have a free hand to discharge their constitutional duties without fear or favour.

Any proven official attempt to use the two agencies for political, religious or ethnic score settling under the guise of anti-corruption war will render the entire anti-graft campaign as damaged goods in the eyes of the public. The anti-corruption war is the right thing to do. We need it to plug the leaking points in the public treasury for the survival and progress of the country.