The $450m Lekki-Epe International Airport: Everything You Need to Know! 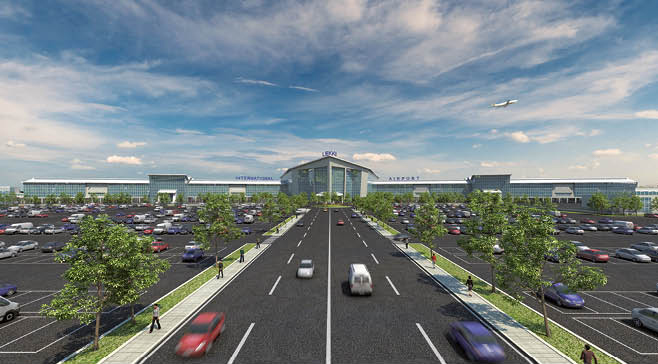 By Dennis Isong
Economic development is a vital component of our economy’s growth, as it creates high-wage jobs and improves people’s quality of life. The Lagos state government has planned another major means to create, attract and maintain jobs in the new developing axis of Ibeju-Lekki, likewise making lives easier.
While the role of economic developers is frequently overlooked, creating and maintaining major development for a region is an important component of a healthy economy and society. Thus, this led to the aim of building an international airport in Lekki-Epe, to bring development, ease down tension on Murtala Muhammed International airport, Ikeja and also to be of service to the fast-growing area of Lagos state.

• Details of the Airport
Due to the large volume of people streaming in and out of Lagos, as well as the strain on the sole existing airport, the Lagos State Government started the new international airport project in Ibeju-Lekki.The new international airport development project ongoing at Lekki-Epe axis is located in Epe, east of Lagos, Nigeria. It is adjacent to Alaro City.
The master plan is complete, and the airport site has been secured on 3500 acres. The airport is designed to handle five million passengers per year, with more room for development in the future.
The Lekki Airport project’s first phase is anticipated to cost US$450 million, and it will be located around 10 kilometers from the Lekki Free Trade Zone (LFTZ). It will be designed to accommodate the Airbus A380, the world’s largest passenger airliner, and will be designated as a Code F airport.
The new airport will relieve congestion at the aging Murtala Muhammed International Airport, as well as serve the fast-growing industrial Lekki district, the Lekki Deep Seaport, Dangote’s 650,000bpd refinery, the Lekki Free Zone, and other locations.
Apart from its primary purpose, the new airport will enhance both residential and commercial infrastructure. Ibeju-Lekki has already landed significant projects like the Free Trade Zone, putting it one step closer to being Africa’s next commercial hub.

• Challenges
However, the newest development has faced so many challenges in the past. For instance, in the year 2015, around May. The development of the Lekki-Epe International Airport is reportedly stalled due to local landowner opposition to the land acquisition process, as well as delays in investors committing to the airport financing.
Sola Oworu, the former Lagos State Commissioner for Commerce and Industry, acknowledged that the state government is “looking for investors” and that construction on the project will resume once new funding is secured. The state administration is also returning some of the land it has bought to 98 local villages, some of which had been purchased for a planned perimeter road. Meanwhile, the project has continued to progress steadily.

• Major Hubs in the Axis
Lekki Free Trade Zone: The Lekki Free Zone which was established in 2006 is a modern free zone that follows international best practices. The zone’s 16,500 hectares are separated into four quadrants and administered by a variety of operators, taking advantage of Lagos State’s status as West Africa’s main distribution hub.
The Lekki Free Zone is situated in Lagos State’s southeast portion, with the Atlantic Ocean to the south and the Lekki Lagoon to the north. It is 50 kilometers from Victoria Island, Lagos, and is bordered by five kilometers of coastline.
Alaro City: It is located in the Lekki Free Zone’s North West Quadrant in Lagos, Nigeria. The city is conveniently located on the Lekki-Epe Expressway, providing easy access to Lagos and the rest of Nigeria. To the south of the city, the largest deep-sea port in West Africa is now under construction.
Dangote Refinery: Alhaji Aliko Dangote, Africa’s richest man, is building the continent’s largest oil refinery, a fertilizer factory, a petrochemical plant, and a sub-sea gas pipeline project, which is valued at $17 billion.
Lekki Sea Port: The largest deep-water port in West Africa is also being built, allowing exports to West Africa and beyond.Local and international investors are flocking to the Zone.

• Benefits of the Project
The new international airport in Lekki-Epe will provide so many benefits to both the resident and the government of Lagos state. Also, improvement to the Economy of the state. Other benefits include;
Investment Opportunity: This massive development is going to provide a lot of opportunities for a secure and long-term investment.
However, before you begin signing checks, you must first comprehend the significance of land titles and pricing. The majority of the land near the airport does not have a C of O land title. The majority of the titles you’ll see there are either excisions in progress or gazettes.
This explains the disparities in gross price between different real-estate firms. Make sure any block of land in Ibeju-Lekki has a legal C of O title before paying for it. Granted; your agent may tell you that a Gazette or excision in a procedure is a ‘done deal’ and that you don’t need to worry; nevertheless, if you’re knowledgeable with how the Nigerian system works, you’ll understand that there’s no guarantee until you have proper documentation.
Land Appreciation: Properties on the periphery of an airport appreciate up to 40% in value in the first few years after the airport’s completion, and the rate rises to around 80% after the airport’s operations are fully operational.
Once landed property is strategically placed close enough to gain all of the benefits of living near an airport while remaining far enough away to avoid the drawbacks of living too close to an airport, such as noise pollution and potential health consequences.
Housing costs rise as a result of the extra benefit of convenience. Hence, this serves as a great benefit to investors in the area.

Dennis Isong Helps Individuals Invest Right In Real Estate.For Questions On This Article Or Enquiring About Real Estate. Follow him on Youtube https://www.youtube.com/LandPropertyNG/ or Whatsapp/Call +2348164741041