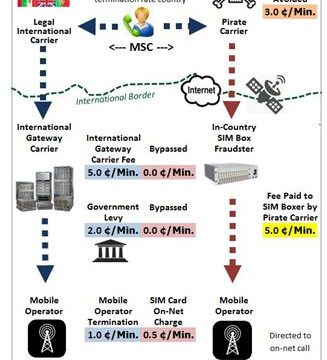 In 2016, it was estimated that telecom companies in Uganda on annual basis were losing about $60 million due to illegal redirection of international calls traffic.

The amount in part led to revenue from voice services to remain flat or grow sluggishly in 2015, 2016 and 2017 – according to telecom revenue analysis in those three years. The illegal redirection is known in technical terms as SIM boxing.
SIM boxing is a practice in telecommunications whereby a person or group of people set-up a device that can take up several SIM cards (a SIM box) and use it to complete international calls it receives from the Internet as voice over IP (VoIP) and in turn serve them to the in-country mobile network subscribers as local traffic.

How Does it Work?
Normally, for example, if you are making a call from the United Kingdom to Uganda, the subscriber will call via their operator (provider A – i.e. Vodafone) that has an International Gateway (e.g. BICS, TATA, etc.) and has termination agreements with operators in Uganda including network X (could be MTN or Airtel). They send the call via their connections to Network X that looks for its subscriber and terminates the call.
In this scenario, all operators – A, BICS, X and the government receive their fees as per set agreements and taxation laws.
This is the legal mode of operations and guarantees revenue for all parties involved.  However, some unscrupulous individuals have found a way around this. The time this issue became rampant or visible, was when the One Area Network (OAN) was launched in 2015, which unfortunately became the transit route for calls originating from other countries.
If someone made a call from the UK to Uganda, on your phone it would be displayed as a call from Kenya because it would have been diverted by some unscrupulous individuals.
The SIM Box has several SIM cards of operators and could also take advantage of any existing on-net (same network) voice bundles and thus ends up paying very little or nothing for the termination of the said call – that is disguised as a local call.
In this scenario, the interconnect operator C undercuts the market interconnect rates and offers cheap rates by spoofing quality. The GSM operator in Uganda (Network X) is cheated of charging the call at premium international rates but rather gets local rates or even earns nothing (if already purchased voice bundles are utilised). The government is also cheated of the USD $9 charged on international calls per minute.
This route is also sometimes referred to as the “Gray Route”.
So, the telecom companies do witness an increased number of calls due to bundled offers but then this doesn’t translate into increased revenue. That means, there is someone else benefiting by rigging the system.

Government Revenue Affected
As stated, the telecoms were estimated to be losing about $60m annually as a result of the gray routing. A loss to the telecom means that they will also be unable to remit the excise duty charge on calls to the government.

With the excise duty charge at about 36 percent, that means government revenue loss of about $21.5m annually. These are amounts that can help the government continue to provide services for Ugandans.
As the telecom operators and the government are counting their losses, the unscrupulous individuals that have only spent a meagre amount to acquire a SIM box machine are reaping at the expense of legitimate business and causing financial loss to government in the form of lost tax revenue.

These SIM boxers can breakeven in less than 1 month and continue to rake in profits for years. There is no deliberate under declaration of telecom revenue because of the investment made in order to be compliant with the tax authorities.
The efforts to reduce this vice has led to some arrests. In 2017, six individuals were arrested, and some convicted in court after they were found to have SIM box devices. They had up-to 250 SIM cards that they used to re-route the calls.

Increased surveillance by all the telecom companies and the Uganda Communications Commission (UCC) played a role in having these individuals arrested, however the problem persists.
UCC did recommend that operators have SIM box detection tools that need to be updated often because the SIM boxers keep finding new ways of bypassing the traditional operators.
This vice affects the quality of international calls of subscribers and is a threat to both telecommunication companies and government – they should work together to keep ahead or altogether eliminate this ever-evolving criminality.

About the Author
Derrick is an independent ICT consultant offering services to government entities, individuals and private companies. He is a seasoned telecoms Executive with, over 16 years’ broad expertise in the set up and operations of 2G, 3G and 4G Telecommunications networks right from network design, rollout, to operations.
He has previously worked as Chief Technical Officer responsible for the Technology strategy and Technical Regulatory matters in two international companies and is passionate about driving technological innovations that change the way businesses are run and increase efficiencies across the organisations.