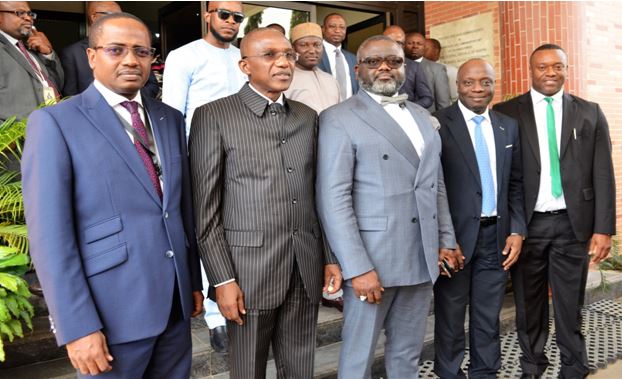 The Chairman of House of Representatives Committee on Banking and Currency, Hon. Sir Jones Chukwudi Onyereri yesterday in Abuja said the House of Representatives of the Federal Republic of Nigeria will soon pay a visit to Arik and Aero airlines for what he described as on the spot assessment of recent positive developments at the two airlines since they were taking over by Asset Management Corporation of Nigeria (AMCON).

Hon. Onyereri who made the declaration when he led the members of the committee to their routine oversight function at the Corporate Head Office of AMCON in Maitama, Abuja noted that members of the House of Representatives Committee on Banking and Currency owe it a duty to Nigerians to visit some of the critical institutions AMCON was mandated to take over in the interest of the nation.

He said, “As a matter of fact, apart from coming here (AMCON) today to carry out our routine oversight function, which necessitated this briefing with the management and staff of AMCON led by Mr. Ahmed Kuru, Managing Director/Chief Executive Officer, we need to particularly pay a visit to Arik and Aero Contractors airlines to know for ourselves and on behalf of all Nigerians what is going on at those airlines. There are positive reports emanating from the two airlines since the involvement of AMCON but it is our duty to ensure that the right things are done in both airlines for the continuous growth and development of the aviation sector and Nigerian economy in general.”

He further said the committee’s visit to AMCON was in order because the Corporation is an interventionist institution of the Federal Government, which falls under the purview of the House Committee’s oversight function. Again he said, “We are here to review the 2017 budget performance of the corporation vis-à-vis what was approved for them and the outcome would help the committee make projections and also provide guidance as the case may be against the budget defence slated for February 28.”

Welcoming the committee in the company of the other Executive Directors of AMCON, Kuru remarked that it is always rewarding and a good feedback mechanism to have the committee come around for oversight function because it affords AMCON the opportunity to rub minds with the legislature as well as draw from what he described as the “legislative wealth of knowledge.”

The AMCON boss however assured the committee that the incumbent management of AMCON has remained prudent and would continue to persevere in the face of adversity posed by the challenging economic realities in the country, which is improving by the day.

Again Kuru said, “2017 was quite challenging businesses in the country. At AMCON, we are sitting on a lot of assets because of the unstable liquidity situation and as you know most of our assets are challenged one way or the other. But with things looking up in 2018, AMCON’s projection looks positive. However, we will continued to be prudent in terms of our spending and running cost generally.”