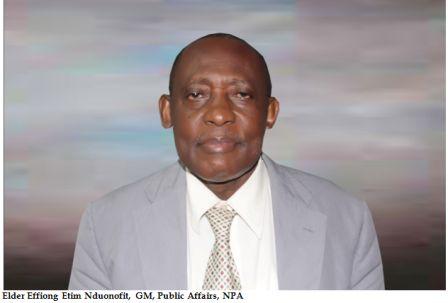 He took over from Chief Michael Kayode Ajayi who handed over the mantle to him at the Corporate Headquarters of the organization in Marina, Lagos.

During the event Mr. Nduonofit the new General Manager enlisted support from all personnel, sections and units of the Public Affairs Division in his quest to contribute most meaningfully to the organization’s image appreciation and publicity mileage.

According to him, “collaborations, should be the watch word as we navigate the very challenging task of ensuring that NPA takes its place of pride amongst notable institutions Nationwide and Internationally”.

Nduonofit urged the Public Affairs officers in the organization to brace up to the new vista in line with the change mantra of the Federal Government. He urge them to key into the vision of the Management of the Authority.

Similarly, the NPA new helmsman opined that the duty of promoting the image of the organization is paramount and should be upheld by everybody in the Division. Before now, Nduonofit was Assistant General Manager (AGM) Audit of the Authority.