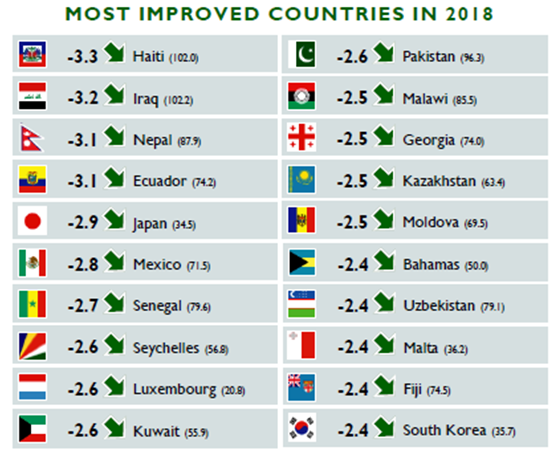 In the week, there were multiple data releases that brought our attention to key growth and development issues in Nigeria.

Meanwhile, the story was the same at home as the National Bureau of Statistics (NBS) and United Nations Development Programme (UNDP) collaborated to create the Human Development Index (HDI) for states which showed slow momentum in boosting education, health and income between 2013 and 2016.
According to Afrinvest Research, ‘we start our analysis with the revised projections of the IMF. The Fund revised its estimate for growth downwards to 1.9% for 2018 from 2.1%, citing concerns about slow growth in agriculture and political uncertainties which restrain investment.’

However, the Fund holds an optimistic view for the future as it upgraded its growth projection from an average of 2.0% to 2.4% between 2019 and 2023. The implication of this is that growth will trail population growth of 2.6% for eight consecutive years. This further indicates that Nigerians would get poorer on the average, while the prospects for strong employment growth would remain bleak.

While the specifics to this forecast are not public information, we note that the Fund’s main concerns with Nigeria are weak revenues which limit government spending and raise debt sustainability risks, and lack of structural reforms to boost the non-oil sector. This is unsurprising as we have always stated that the lack of reforms will keep growth weak and below pre-oil price shock levels of 6.0 – 7.0%. However, we are slightly more optimistic that growth will breach 2.6% as early as 2020.
On the stark development indices, the World Bank Human Capital Index (HCI) is a new measure that provides a way to assess the productivity of the next generation of workers while also serving as a call to nations to invest in the education of children.

The Bank estimates that the HCI value for Nigeria increased marginally to 0.34 in 2017 from 0.33 in 2012, showing that progress has been slow. Even worse, this value indicates that Nigeria ranks behind peers in SSA as well as among countries considered to be low middle-income in boosting productivity, thus suggesting that expected growth outcomes will be behind peers.

In summation, breaking out of the cycle of low productivity, growth and development require sustained investment in education.