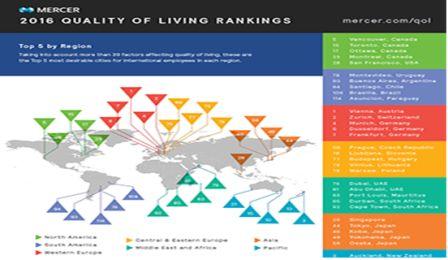 Despite increased political and financial volatility in South Africa, its cities fell within the top 100 of the world’s highest quality of living and remain attractive destinations for expanding business operations and sending expatriates on assignment, according to Mercer’s 19th annual Quality of Living survey. Durban (87) ranked the highest for quality of living within South Africa, closely followed by Cape Town (94) and Johannesburg (96).
“Economic instability, social unrest, and growing political upheaval all add to the complex challenge multinational companies face when analysing quality of living for their expatriate workforce,” said Ilya Bonic, senior partner and president of Mercer’s Career business. “For multinationals and governments it is vital to have quality of living information that is accurate, detailed, and reliable. It not only enables these employers to compensate employees appropriately, but it also provides a planning benchmark and insights into the often-sensitive operational environment that surrounds their workforce.
“In uncertain times, organisations that plan to establish themselves and send staff to a new location should ensure they get a complete picture of the city, including its viability as a business location and its attractiveness to key talent,” Mr Bonic added.
Vienna occupies first place for overall quality of living for the 8th year running, with the rest of the top-ten list mostly filled by European cities: Zurich is in second place, with Munich (4), Dusseldorf (6), Frankfurt (7), Geneva (8), Copenhagen (9), and Basel, a newcomer to the list, in 10th place. The only non-European cities in the top ten are Auckland (3) and Vancouver (5). The highest ranking cities in Asia and Latin America are Singapore (25) and Montevideo (79), respectively.
Mercer’s survey also includes a city infrastructure ranking that assesses each city’s supply of electricity, drinking water, telephone and mail services, and public transportation as well as traffic congestion and the range of international flights available from local airports.

Africa
Five Africa cities managed to remain in the top 100 rankings in regards to quality of living, with Port Louis in Mauritius topping the Africa chart at an overall 84th position. Durban (87) ranked the highest for quality of living within South Africa, closely followed by Cape Town (94) and Johannesburg (96).

On the other side of the scope, Brazzaville (224) in the Republic of the Congo, N’Djamena (226) in Chad, Khartoum (227) in Sudan and Bangui (230) in the Central African Republic formed the four lowest-ranked cities for quality of living within Africa.
Port Louis is the only Africa city which managed to fall within the top 100 rankings with the highest for infrastructure in 94th place. Cape Town missed it with 1 position ranking at 101st position followed by Tunis (104) in Tunisia and Victoria (109) in Seychelles concluding the top 4 Africa cities.

Lack of infrastructure remains a challenge within Africa, with N’Djamena (224), Bangui (226), Conakry (227) in Guinea Republic and Brazzaville (228) in the Republic of the Congo forming the lowest rankings.

Middle East
Dubai (74) continues to rank highest for quality of living across the Middle East, rising one position in this year’s ranking, followed closely by Abu Dhabi (79), which climbed three spots. Damascus (225) in Syria, Sana’a (229) in Yemen and Baghdad (231) in Iraq are the region’s three lowest-ranked cities for quality of living.
Dubai also ranks highest for infrastructure in 51st place. Only five other cities in this region make the top 100, including Tel Aviv (56), Abu Dhabi (67), Port Louis (94), Muscat (97), and upcoming host of the 2022 FIFA World Cup, Doha in Qatar, which ranks 96th for infrastructure. Cities in the Middle Eastern countries dominate the bottom half of the table for infrastructure, with Damascus (224), Sana’a (229), and Baghdad (230) ranking the lowest.

Europe
Even with political and economic turbulence, Western European cities continue to enjoy some of the highest quality of living worldwide. Still in the top spot, Vienna is followed by Zurich (2), Munich (4), Dusseldorf (6), Frankfurt (7), Geneva (8), Copenhagen (9), and a newcomer to the list, Basel (10).

In 69th place, Prague is the highest ranking city in Central and Eastern Europe, followed by Ljubljana (76) and Budapest (78). Most European cities remained stable in the ranking, with the exception of Brussels (27), dropping six places because of terrorism-related security issues, and Rome (57), down four places due to its waste-removal issues.

Finally, Istanbul fell from 122nd to 133rd place as a result of the severe political turmoil in Turkey during the past year. The lowest ranking cities in Europe are St. Petersburg and Tirana (both ranked 176), along with Minsk (189).
Western European cities also hold most of the top ten places in the city infrastructure ranking with Frankfurt and Munich jointly ranking 2nd worldwide, followed by Copenhagen (4) and Dusseldorf (5). London is in 6th place, and Hamburg and Zurich both rank 9th. Ranking lowest across Europe are Sarajevo (171) and Tirana (188).
“Cities that rank high in the city infrastructure list provide a combination of top-notch local and international airport facilities, varied and extended coverage through their local transportation networks, and innovative solutions such as smart technology and alternative energy,” said Mr Parakatil. “Most cities now align variety, reliability, technology, and sustainability when designing infrastructure for the future.”

Americas
In North America, Canadian cities take the top positions in the ranking. Vancouver (5) is again the region’s highest ranking city for quality of living. Toronto and Ottawa follow in 16th and 18th place respectively, whereas San Francisco (29) is the highest ranking US city, followed by Boston (35), Honolulu (36), New York (44), and Seattle (45).

High crime rates in Los Angeles (58) and Chicago (47) resulted in these cities dropping nine and four places respectively. Monterrey (110) is the highest ranking city in Mexico, while the country’s capital, Mexico City, stands in 128th position. In South America, Montevideo (79) ranks highest for quality of living, followed by Buenos Aires (93) and Santiago (95). La Paz (157) and Caracas (189) are the lowest ranking cities in the region.
For city infrastructure, Vancouver (in 9th place) also ranks highest in the region. It is followed by Atlanta and Montreal, tied in 14th place. Overall, the infrastructure of cities in Canada and the United States is of a high standard, including the airport and bus connectivity, the availability of clean drinking water, and the reliability of electricity supplies.

Traffic congestion is a concern in cities throughout the whole region. Tegucigalpa (208) and Port-au-Prince (231) have the lowest scores for city infrastructure in North America. In 84th place, Santiago is the highest ranking South American city for infrastructure; La Paz (168) is the lowest.

Asia-Pacific
Singapore (25) remains the highest ranking city in the Asia-Pacific region, where there is great disparity in quality of living; Dushanbe (215) in Tajikistan ranks lowest. In Southeast Asia, Kuala Lumpur (86) follows Singapore; other key cities include Bangkok (131), Manila (135), and Jakarta (143).

However, when ranked for infrastructure, only Sydney (8) makes the top ten, with Perth (32), Melbourne (34), and Brisbane (37) also ranking well for infrastructure in Oceania. By and large, cities in Oceania enjoy good quality of living, though criteria such as airport connectivity and traffic congestion are among the factors that see them ranked lower in terms of city infrastructure.