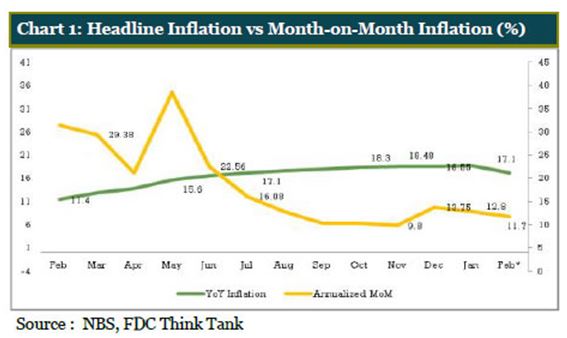 The National Bureau of Statistics (NBS) has released its CPI and Inflation report for the month of June 2018, revealing that Nigeria’s headline inflation rate moderated on a year-on-year basis for the 17th consecutive month to 11.23%, from 11.61% in May.

Compared to Cordros Capital’s forecast of 10.90%, the number came in 33 bps higher and also 27 bps ahead of Bloomberg compiled average estimate of 10.96%. Parsing the released data, we establish a number of instructive takeaways, including:

The Central Bank of Nigeria’s (CBN) Monetary Policy Committee (MPC) in its third meeting of the year yesterday decided to maintain the status quo.

Drawing on prevailing realities and insights from the last meeting in May, we expect members of the Committee will find the case for maintaining status quo most compelling. We would like to reiterate the MPC’s shift from a potential rate cut to a more proactive view of inflation, amid upside risks to liquidity injection over H2-18.

While we share consensus view that elevated liquidity profile over the rest of the year portends upside risk for inflationary conditions, we equally posit that supply-side dynamics will play even a much greater role.

We establish that circa 87% of the entire CPI basket is driven by factors independent of liquidity position owing to the autonomous consumption nature of the specific constituent elements.

Very instructive in that regard, for instance, we highlight likely pressure from higher food prices (domestic and imported food inflation jointly account for 64% of the entire CPI basket) over the rest of the year amid the unresolved security upheavals in the agricultural space and rising global inflation.