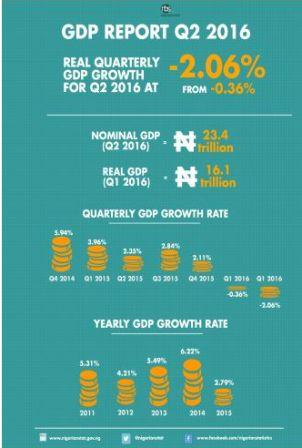 The report showed economic output declined in real terms for the fourth consecutive quarter by 1.3% Y-o-Y in Q4:2016, much in line with Afrinvest’s projection of -1.2%, thus bringing FY: 2016 GDP growth to -1.5% Y-o-Y: the first annual GDP contraction in 25 years.
Oil sector was the major drag to aggregate GDP performance against the backdrop of renewed militancy in the Niger Delta region which kept oil production below optimal and medium term trend level for much of 2016.

Non-Oil GDP also contracted 0.3% Y-o-Y in Q4: 2016, reversing the 3bps Y-o-Y growth in Q3: 2016, following a steeper and extended contraction in Services sector output to third consecutive quarter (-1.5% Y-o-Y in Q4:2016 from -1.2% Y-o-Y in Q3:2016) which offset sustained outperformance of the Agriculture sector which grew +4.0% Y-o-Y in the period and moderation in Industrial sector weakness (from -12.2% Y-o-Y in Q3:2016 to -6.7% in Q4:2016).
Sectoral breakdown for full year numbers indicates the Industrial Sector recorded the worst performance (-8.4% Y-o-Y compared to -2.2% in FY:2015) due to weaker oil production volumes and lingering FX challenges which weighed on Manufacturing sector activities. Similarly, the Services sector contracted 0.9% Y-o-Y from 4.7% Y-o-Y in FY: 2015. The Agriculture sector was the only outlier as it strengthened 4.0% Y-o-Y from 3.8% Y-o-Y in FY: 2015.
Our outlook for growth in FY: 2017 is more sanguine than our last forecast update. Of the three cyclical/structural factors we listed as important in influencing Nigeria’s business cycle – oil production, oil prices and policymaking, we have seen substantial improvement in two. Oil production has improved to peak level of 2.2mb/d according to government officials, while oil prices have also stabilized above US$50.0/b with outlook still bullish. The combination of higher oil production and oil prices is positive for FX earnings, government revenue, oil GDP and ultimately aggregate growth. Consequently, we expect a sub-1.0% contraction in Q1:2017 but forecast GDP numbers to swing positive from Q2:2017 due to low oil GDP base in the last 9 months of 2016. Hence, we have revised our FY: 2017 growth forecast upward from an earlier flattish projection to 0.85%.
Yet, rekindling the animal spirit in investors and consumers to achieve high and sustainable growth requires a boost in confidence which at the moment remains ebbed by FX liquidity challenges amidst other structural constraints. February PMI data released by the CBN earlier in the week is a pointer of the subsisting weak level of confidence in the economy.

Manufacturing and Non-Manufacturing activity of the private sector fell for the second consecutive month at a faster rate with the indicators declining from 48.2 and 49.4 in January to 44.6 and 44.5 respectively in February.

Manufacturing production level fell in the month (from an expansion in January), while new orders, employment level and inventories declined at a faster rate. Non-manufacturing business activity, inventory level, level of employment and new orders also declined. The data reinforce our conviction that despite rebound in some key cyclical growth drivers, policymaking (fiscal and monetary) could remain the major downside risk to growth in the short to medium term.

Global Market Review and Outlook
Sentiment in the global equities markets under our coverage was mixed this week as the dollar slid on Friday but stayed on track for a W-o-W gain on growing anticipations that the U.S. Federal Reserve will raise interest rates at its mid-March meeting. All indices in the developed market closed higher as the US S&P rose 0.6% W-o-W while the NASDAQ recorded 0.3% W-o-W gains. The UK FTSE was up 1.6% W-o-W.
In the Euro-Asian region, performance was largely bullish as all indices closed northwards save for the Hong Kong HANG SENG which depreciated 1.7% W-o-W. European equities were led by gains in banking and mining stocks with the France CAC advancing the most, up 3.0% W-o-W while the German DAX followed with a 1.9% W-o-W uptrend. Similarly, the Japan Nikkei close 1.0% higher.
BRICS markets recorded a bearish week as all indices closed in the red save for the South African FTSE which added 0.1% W-o-W. Conversely, the Russian RTS topped decliners, shedding 2.1%W-o-W while the China Shanghai followed suit, losing 1.1% W-o-W. Similarly, the Brazil IBOVESPA and the Indian BSE also slid 0.6% and 0.2% W-o-W.
African markets posted mixed performance with 2 indices closing higher and two lower. The Egyptian EGX and Ghana GSE rose 0.6% apiece while the Kenya NSE tumbled 2.0% W-o-W. Contrary to the previous week, the Nigerian All Share Index was unable to sustain gains as it recorded a 0.9% loss W-o-W on account of DANGCEM.

Equities Market Review and Outlook
Unable to sustain previous week’s uptrend, the All Share Index (ASI) was down 0.9% W-o-W dragged by decline in DANGCEM which fell 5.0% despite FY: 2016 earnings published during the week. The index trended southwards on all trading days of the week save for Monday and Friday.

Meanwhile, NESTLE’s FY: 2016 result released on Thursday echoed overall weakness in the economy as a 20.3% Y-o-Y growth in gross revenue to N181.9bn was more than offset by a 66.6% decline in PAT to N7.9bn. The Company however declared a N10.00 dividend for the reporting period.
Performance across sector was largely bullish, save for the Industrial Goods Index which closed southwards, down 2.3% as a result of sell offs in DANGCEM (-5.0%) and PAINTCOM(-4.6%). On the flip side, the Oil & Gas index bounced back from last week’s decline, with a 4.5% W-o-W gain on account of bargain hunting in SEPLAT (+8.1%) and OANDO (+5.3%).

The CBN auctioned OMO bills on Monday offering a total of N60.0bn. Of the N60.0bn on offer, only N16.3bn was subscribed while N15.8bn was allotted. Our view is that lesser allotment relative to subscription is tied to higher marginal rates quoted by investors.  To keep liquidity in check, the CBN auctioned OMO on all days save for Wednesday. OBB and O/N settled at 16.7% and 17.3% respectively on Friday, up 3.6% and 3.3% W-o-W.
Activity in the T-Bills market opened the week soft as investors awaited primary market auction slated for Wednesday. Accordingly, average yield steadied at 18.6% from Monday to Wednesday.  A total of N310.2bn worth of T-Bills was rolled over at the auction on Wednesday, and investors continued to show strong appetite for these instruments which were all over-subscribed. Average yield settled at 19.1% on Friday, up 2.2% W-o-W.
In a circular released by the DMO during the week, the minimum amount required for participation in T-Bills PMA was revised from N10, 000.0 to N50.0m naira. We believe this could potentially slow activities in the market.

Foreign Exchange Review and Outlook
Following the implementation of the New CBN directive last week, parallel market rate appreciated to N455.00/US1.00 on Monday from N460.00/US$1.00 the previous Friday. The local unit further improved to N450.00/US$1.00 on Tuesday as the CBN continued its intervention to the official market to fulfil bids for Personal and Business Travel Allowance, School fees as well as Medical and Tourism Allowance. Interestingly, this trend was reversed on Thursday as street rates depreciated to N458.00/US$1.00 and to N465.00/US $1.00 on Friday. At the official market, rates marginally improved from N305.50/US$1.00 on Monday to N305.25/US$1.00 on Friday.
Total value of open contracts at the FMDQ OTC FX Futures market settled at US$3.96bn similar to the prior week. The APRIL 2017 instrument remains the most subscribed at US$0.8bn of the US$1.00 on offer for the instrument. Since the introduction of the market in 2016, no instrument is yet to be fully subscribed and as such the liquidity need for which the market was created is yet to be fully realised.
We expect official market rates to continue to trade within a tight band as the CBN sustains its intervention program, parallel market rate is however expected to pull southwards until demand and supply dynamics establishes new short term rate.

Bond Market Review and Outlook
Activities in the local bonds market remained soft this week as investors’ concentrated on shorter term money market instruments. Nonetheless, benchmark bond yields trended southward, with fair buy interest observed during the week (save for Monday when average yield rose 13bps). Average bond yield across benchmark instruments opened the week at 16.3% and had dipped to 16.2% by Thursday, before settling at 16.2% at the end of the week, indicating a flat W-o-W performance. We expect the scheduled commencement of the FGN savings bonds on March 13 2017 to deepen retail penetration and involvement in the local bonds market and also buoy activity level in the market.
Contrary to last week when positive sentiment filtered across Sub-Saharan African sovereign Eurobonds, performance was mixed this week.

The re-pricing of instruments led to an increase in yields on the Nigerian, Ghanaian and South African sovereign bond instruments whilst the Gabon, Senegal, Ivory Coast and Zambian sovereigns enjoyed buy sentiment. Nonetheless, Nigeria’s FGN 2023 Eurobond remains the best performing sovereign Eurobond with a YTD return of 5.5%.
Similarly, performance of the Nigerian corporate Eurobonds was mixed as yield fell on the ZENITH 2019 (down 47bps W-o-W) and FIRST BANK 2020 (down 12bps W-o-W) instruments. All Access Bank Plc’s instruments enjoyed positive sentiment with yield on ACCESS 2017, ACCESS JUN 2021 and ACCESS OCT 2021 declining 32bps, 46bps and 45bps respectively.