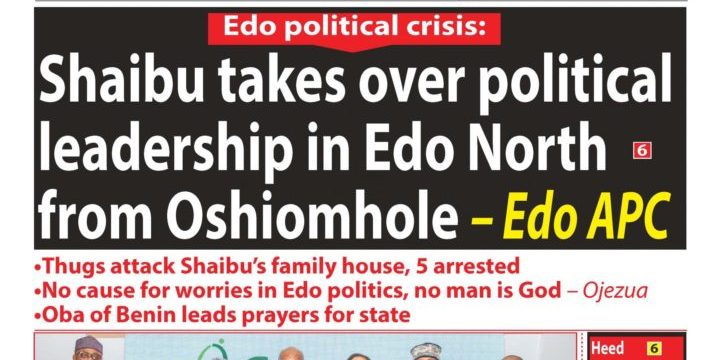 The best of the nation’s human resources and institutions will be on parade on Friday March 20, 2020 as Champion News Media, the publishers of Champion Newspapers rolls out the drums in celebration of the winners of its 2019 awards and recognitions.

Scheduled to hold at the prestigious Oriental Hotel in Victoria Island, Lagos, the Champion Newspapers Awards is targeted at acknowledging the contributions of some of the outstanding individuals, organisations, agencies  and institutions of both state and federal government to the development of Nigeria in particular and humanity in general in the areas of business, politics, culture, social and infrastructural developments.

The Group Managing Director, GMD and Editor-in-Chief of Champion Newspaper, Dr. (Mrs.) Nwadiuto Iheakannwa who spoke on the preparations for the event had expressed delight at the elevation of the 2019 edition of the awards to an ‘A’  list event  saying that the event  will translate to a parade of stars.

“The awards and recognitions are intended to acknowledge those persons, organisations, institutions and agencies, who made outstanding contributions in reshaping the growth and fortunes of Nigeria and indeed the whole world in 2019. We took extra care in sorting out these individuals and organisations as our Board of Editors was painstaking in voting for the right candidates.

“It is our own little way of encouraging Nigerians to strive towards excellence in all their endeavours. We should have the people that we should look up to and emulate at all times. The award ceremony is Champion Newspaper’s own way of fostering a better society. We are looking forward to hosting no fewer than 500 dignitaries at the event”, she explained.

Already, the governor of Lagos Mr. Babajide Sanwo-Olu has accepted the role of the Chief Host at the March 20, 2020 event which will be presided over by Minister of the Niger Delta Affairs, Senator Godswill Apkabio. Senator Akpabio is a two- term governor of oil rich Akwa Ibom State.  The charismatic Senate Minority Leader, Senator Enyinnaya Abaribe will be the Special Guest of Honour.

No fewer than 10 serving senators and House of Representatives members have confirmed their attendance at the event. Also expected in attendance is the Speaker of the Lagos State House of Assembly, Rt. Hon. Mudashiru Obasa. Imo State Governor, Senator Hope Uzodinma is expected to make a special appearance at the event.

Giving an insight into what promises to be an award like no other, Dr. Iheakanwa revealed that it took the in-depth analysis of the profiles and contributions of so many nominees for the selection committee to announce the Air Peace Chief Executive Officer, Mr. Allen Onyema as the 2019 Champion Newspapers Man of the Year.

Other awardees are: Senator Annie Okonkwo who emerged Democracy Icon of the Year, God is Good Logistics will mount the podium as Logistics Company of the Year and Dr. (Mrs) Asabe Shehu Yar’ Adua Foundation who will be decorated as the Non Governmental Organisation (NGO) of the Year.

The Group Managing Director of Champion Newspapers further assured on capitalizing on the award series in encouraging the culture of excellence in both the private and public sectors of the nation’s economy in order to challenge the ingenuity of Nigerians.

“I am confident that with the appropriate policies and business environments, Nigeria will get her crop of managers to exhibit better work culture. That is why the whole nation will have to keep encouraging those who are known to be doing the right things. The reward for hard work is more work. Champion Newspapers will continue to partner with groups and individuals including corporate organisations in promoting the good values of Nigerians. This is part of the objectives behind the annual Champion Newspaper’s Awards ceremony”, she explained.

Meanwhile, letters of commendations have continued to trail the release of the list of this year’s awardees just as the recipients have confirmed their acceptance of the awards, thereby setting the tone for the hosting of the landmark event on March 20, 2020.