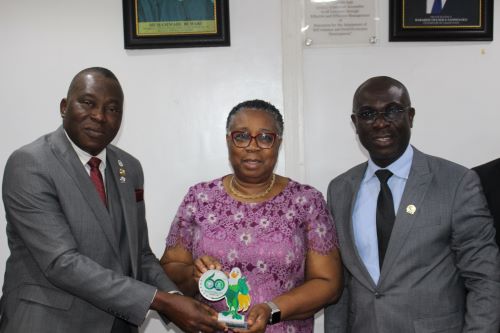 L-R: Deputy President of The Nigerian Council of Registered Insurance Brokers (NCRIB), Mr. Babatunde Oguntade presenting the 60th Anniversary Mascot to Commissioner for Education, Lagos State, Mrs. Folashade Olufisayo, during the visit of NCRIB Research and Development Committee to the Commissioner in Lagos. With them is the Executive Secretary/CEO of the NCRIB, Mr Tope Adaramola.

The Nigerian Council of Registered Insurance Brokers (NCRIB) has advanced plans for sustainable engagement with the Lagos State Government for the promotion of insurance by secondary school students in the State.

The Council took this step when its delegation visited the Lagos State Commissioner for Education, Mrs. Folashade Adefisayo in Alausa, Ikeja, Lagos.

Speaking, the Deputy President of the Council, Mr. Babatunde Oguntade regretted the slow acceptance of insurance as a subject in the curriculum of secondary school and noted that the Brokers body craved the support of the State Ministry of Education to change the narrative positively

Oguntade who is also the Chairman of the Research and Development Committee of the Council opined that against noxious beliefs about insurance, the profession was one that accommodated diverse people from varied educational backgrounds which ultimately provides basis for the richness of the profession

The Lagos State Commissioner for Education, Mrs. Folashade Adefisayo rued the poor acceptance of insurance generally in the society despite the huge potentials of the profession

Adefisayo disclosed that the comprehensive school project of the Lagos State Government should be utilised by the Council and the insurance industry generally to provide hands-on training for students of the peculiar schools towards making them self-reliant as against obsession for certificate.

She advised the industry on the need to rethink and re-engineer as a way of making insurance a favourable option for the youth.