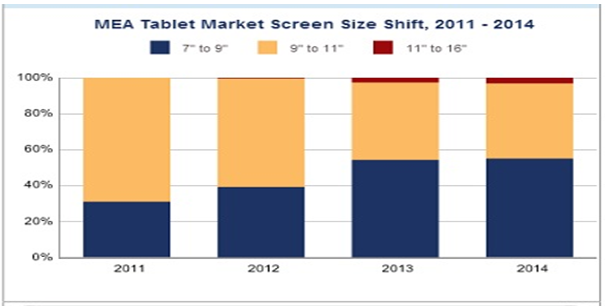 The global ICT research and advisory services firm’s latest data shows that the overall market totaled 3.52 million units for the quarter, with Middle East shipments declining 18.8% year on year. By contrast, Africa performed much better, with shipments increasing 2.0% over the same period.

“In light of these circumstances, the commercial sector – spurred by some large-scale education deals – holds the key to driving growth in the region’s tablet market over the coming quarters.”

In terms of vendor rankings, Samsung continued to lead the tablet market in Q2 2016 with 20.8% share, despite seeing its shipments decline 35.3% year on year. Lenovo remained in second place with 12.9%, having suffered a 15.1% decline in shipments.

Huawei leaped above Apple to rank third in the market after its shipments increased 179.3% year on year to give it 10.0% share. Apple followed closely behind in fourth place with 9.3% share, having seen its shipments decline 28.1%.

“Tablets have traditionally been used for content consumption rather than content creation, and as consumers have gradually transitioned to bigger smartphones, the majority of content consumption activities have shifted in the same direction and away from tablets,” says Nakul Dogra, a Senior Research Analyst for Personal Computing, Systems, and Infrastructure Solutions at IDC.

“Looking forward, the rise of detachable tablets will help to boost the use of tablets for content creation purposes, something that has traditionally been limited to PCs for the majority of consumers.”

Partially compensating for the continuing slowdown in consumer demand is a massive order for Windows-based detachable tablets that has been placed as part of Kenya’s Digital Literacy Programme. The size of this deal has led IDC to revise its growth forecast for shipments of Windows tablets in 2016 upwards from 78.2% year on year to 232.3%. It has also resulted in a slight upwards revision of IDC’s forecast for the overall MEA tablet market’s performance in 2016, although shipments will still be down 7.0% year on year to 15.07 million units.

“The pace of innovation in the tablet market has slowed considerably, and consumers are now holding onto their tablets for longer due to the minimal differences between their existing devices and the new-generation of tablets being pushed by vendors,” says Dogra.

“This trend of longer replacement cycles is likely to continue as there are no innovative products lined up for the foreseeable future.”