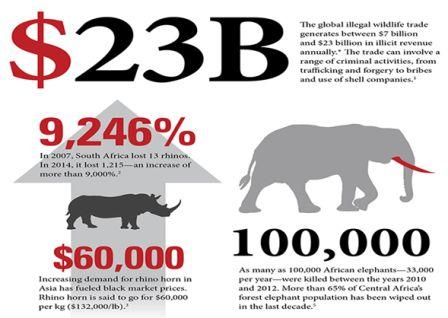 The Global Wildlife Program has released the first-ever review of international donor funding for combatting illegal wildlife trade in Africa and Asia, which shows that over $1.3 billion was committed by 24 international donors since 2010, or approximately $190 million per year.

While there is growing momentum from the international community to combat wildlife crime, reliable information on donor funding has been lacking. The Analysis of International Funding to Tackle Illegal Wildlife Trade fills this gap by showing the scale of funding by donors and the depth and breadth of activities to tackle the crisis.

“Wildlife crime robs countries of their natural assets and undermines sustainable and inclusive development,” said Laura Tuck, Vice President for Sustainable Development at the World Bank. “If we’re to tackle this effectively we need strong coordination of donor efforts and financing.”

Key findings of the report include:

“Poaching and illegal wildlife trafficking are reaching unprecedented levels and while many efforts are underway to combat the problem, reliable information on donor funding has been lacking. The analysis fills an important gap in our understanding of the collective response. It will not only provide a better understanding and coordination of the contributions of the international community, it should ultimately assist those on the ground protecting the wildlife and the livelihoods of local communities,” said Naoko Ishii, CEO and Chairperson for the GEF.

Due to the cross-border and multi-dimensional nature of illegal wildlife trade, the development community must partner with stakeholders from multiple sectors and countries to reduce poaching, trafficking, and the demand for wildlife and wildlife products.

“We strongly believe that the findings and recommendations of this report will make a vital contribution to CITES Parties—be they donors, beneficiaries, or from range, transit, or destination states—in better connecting their efforts along the entire illicit trade chain to combat these serious and highly destructive crimes,” said John E. Scanlon, CITES Secretary-General.