We, The Prisoners of DStv

Once upon a time, there was a homegrown payTV network in Nigeria named HiTV. Established in 2007, it later won the rights to the English Premiership League (EPL) which was the icing on the cake for it and its rising clientele. Unfortunately, the romance did not last.

By 2010, the Toyin Subair-led HiTV was unable to renew and retain the EPL deal in a $100 million duel with Multichoice, the South African-owned operator of DStv. HiTV lost. DStv snatched the deal. But as we now know, HiTV was not the only loser. Nigerians also lost!

The Prisoners of DStv
The clinching of the EPL deal by HiTV was not just a Toyin Subair affair. It was a national effort by the Federal Government of Nigeria through the then Minister of Information, Mr. Frank Nweke Jr., to empower a Nigerian firm to have custody of the EPL sponsorship for the benefit of Nigerians who have become ardent worshippers of English Premier League.

However, the silent objective of supporting HiTV to clinch the deal was to provide effective competition to the South African- owned DStv, which had become a foreign monopoly in Nigeria. 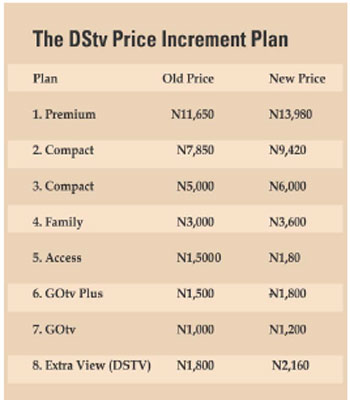 The first time, it worked. The second time, it failed. And today, payTV subscribers in Nigeria have become virtual prisoners to DStv. Indeed, on March 3, 2015, Multichoice, the owners of DStv issued a statement, increasing the price of its offerings across all the bouquets on offer by 20 per cent with effect from April 1, 2015. As expected, the company cited inflation and non- increment last year as reasons for the action.

But the inconvenient truth for the unjustifiable increment is that DStv is now a monopoly in Nigeria. It can increase charges at will without qualms as subscribers have nowhere else to run to if they desire to enjoy the same services, especially EPL games.

DStv is the only rights owner to EPL games in Nigeria-we either pay the new charges imposed with impunity by Multichoice to enjoy EPL matches or forget the EPL.

The DStv Monopoly
The death of HiTV did not mean much to a lot of payTV subscribers in Nigeria when it lost the EPL rights then, but it does now! The more we are screwed by DStv, the more we remember HiTV. And everyday, we mourn: If only Toyin Subair and his team did not fumble on their financials, at least, there would be no DStv monopoly on our shores today.

The reality of today is that DStv is a monopoly we cannot ignore, control or checkmate, unless we decide to bid goodbye to EPL games, which is the major attraction on the bouquet offerings.

Monopolies treat their customers with disdain and extort charges from them with mindless impunity, knowing quite well that such customers have no alternative to fall back on. Monopolies have no place in a modern, capitalist environment. The greatest sadness is having a foreign firm operate as a monopoly in another clime. The DStv monopoly in Nigeria is abhorrent and distasteful.

Yes- two folks went to court to challenge the new charges by DStv. To me, it was an exercise in futility. There is no law in Nigeria mandating any person to subscribe to DStv. Such subscription is based on ability or capacity to pay the charges or fees imposed by the service provider. It is a matter of choice: you either pay the fees or switch off. We can only exert moral suasion on DStv and pray for the emergence of a challenger to them.

A second instance was the price of SIM cards, which were selling as much as N20, 000 in 2001. Today, SIM cards are virtually free. That is the power of competition. Without such competition in the payTV business, DStv will continue to lord it over us and we would have no recourse to another provider.

Who Regulates PayTV Business ?
When the furious complaints on the charges were rising and falling like waterfalls, something came to my mind: who regulates the payTV business in Nigeria? The National Broadcasting Commission (NBC) came straight to me. Again, l asked: how has the NBC regulated this segment of the market over the years and how effective has this regulation been? Are payTV firms empowered to raises charges with or without regulatory approval? Did the NBC authorise or approve the current 20 per cent hike in charges by DStv?

Going Forward
Today, we are willing prisoners of DStv by choice, not by legal conviction. Unfortunately, we shall remain in the same fate until a capable competitor arrives on the scene to rescue us from the monopolistic greed of DStv. Yes-we will complain and grumble over the charges. Yes-some angry folks will go to court.

Yet, no one can initiate a Boycott- DStv protest movement and win. And no one will stop us from paying the inflated charges to enjoy our adorable EPL games. We are condemned to remain Prisoners of DStv!