The Buhari/Osinbajo Assets Declaration: A Way Forward for Nigeria 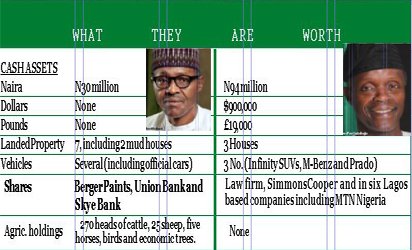 The recent public declaration of assets by President Muhammadu Buhari and Vice-President Yemi Osinbajo has opened a new vista of public life by public officials in Nigeria.

The reason is simple: public declaration of assets by public officials has never been an easy task in Nigeria due to personal pecuniary interest in the line of duty. Over the years, stories have been told (real and imagined) of how people of lesser resources go into public office, either elected or appointed, and suddenly become immensely wealthy without verifiable source(s) of income other than being in public office or government.

Gradually, as the stories became more and more intense, the resultant public outcry for public officials to declare their assets on assumption of public office led the way for the policy on assets declaration. The core objective was and is to ascertain what assets a public official is bringing to the office and the level of assets against his name when he bows out of office.

Like everything Nigerian, this simple law to safeguard the public treasury from the fraudulent activities of our fellow citizens has refused to work effectively to achieve the desired objective. The measure has been frustrated endlessly by those who ought to obey it in order to protect their illegal acquisitions while in public office and outside of it.

It is against this background that we commend President Muhammadu Buhari and Vice-President Yemi Osinbajo for taking the right step to move Nigeria forward in terms of assets declaration by public officials in line with the ant-corruption posture of the present administration.

As leaders who must lead by example, this simple but weighty gesture by them has shown in no small measure, their resolute desire to rid the country of the obnoxious toga of “one of the corrupt nations of the world” in accordance with their electoral mandate to champion effective anti-corruption war in the country.

It is also important that other members of the government take a cue from their commendable act and do the same, at the federal, state and local government levels. The public declaration of assets should not be limited to the president and vice-president only. It should be extended to other tiers of government to make the exercise as effective and meaningful as it ought to be.

Indeed, available records over the years reveal that corruption does not exist only at the federal level-it permeates every level of governance in Nigeria. This therefore makes it imperative that governors and local council chairmen, including ministers, special assistants, heads of ministries, departments and agencies, as well as commissioners also declare their assets publicly. In essence, every public officer in Nigeria, at whatever level, should emulate the good example of Buhari and Osinbajo and do the same.

As we commend the president and vice-president on this, we also implore them to remain steadfast in the fight against graft in the country, without any form of political, ethnic or religious bias in the process. A transparent, fair and efficient anti-corruption campaign is crucial to the ultimate survival of the nation, especially at a time of dwindling oil revenue.

We warn seriously that any attempt by the Federal Government or anti-graft agencies (EFCC & ICPC) to use the anti-graft war to pursue or settle personal or political scores will ultimately backfire and render the entire anti-corruption crusade a ruse.

As we watch the efforts of the administration in this regard, we hope that the anti-corruption will become a watershed in the history of governance in Nigeria.