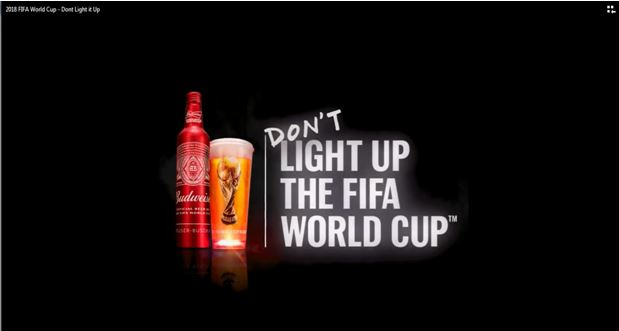 As the official beer of the 2018 FIFA World Cup Russia, Budweiser is focused on amplifying fan energy and delivering unique experiences.

It would be recalled that Budweiser recently unleashed its Red Light Cups that lights up in response to shouting, cheering, or any other form of excitement by fans watching by fans watching games.

In a very interesting and exciting twist to the global campaign tagged, “Light Up the FIFA World Cup”, Budweiser challenged football fans across the globe, including Nigerian football fans to do the impossible to suppress their excitement and not shout and scream in support of their team while watching their first group match during this year’s World Cup, with the “Don’t Light It Up” campaign.

Featuring fans of five national teams at the FIFA 2018 World Cup: Argentina, Nigeria, Brazil, South Korea, and England, “Don’t Light It Up” gave participants once in a life time opportunity of experiencing the FIFA 2018 World Cup live in Russia by NOT lighting up Budweiser’s noise activated Red Light Cup. To make things even more difficult, participating fans were placed in a sound proof booth in the middle of a crowded sports bar. Unfortunately, fans from Argentina and Korea could not make it.

For Nigerian fans, who were lucky enough not to shout or scream during the matches, they had a special surprise visit from football legend, Kanu Nwakwo, who handed over to them free tickets to go watch the remaining FIFA 2018 World Cup matches in Russia.

In his remarks, Nwankwo Kanu stated that Nigerian football fans are some of the most passionate and spirited fans in the world. “When they watch a match there is singing, jumping up, praying and doing everything possible to cheer their team on. So, it was crazy to see them watch our team compete in the World Cup without making any noise or lighting up Budweiser’s Red Light Cup.”

He added: “I had such a great time partnering with Budweiser, a brand I enjoy, for ‘Don’t Light It Up.’ Getting to go to the World Cup is special and it means so much to these lucky fans to win a trip from Budweiser. I could see it on their faces. I could see how happy they are, and to be able to see the World Cup live, that’s awesome!”