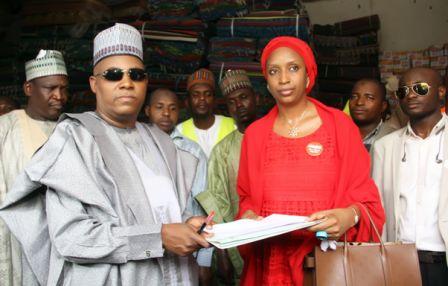 The Management of the Nigerian Ports Authority (NPA) has stated its firm resolve at sustaining the commitment it had established concerning her corporate social responsibility efforts across the country.

The Managing Director of the organization, Hadiza Bala Usman gave this information to a cross section of newsmen in Maiduguri, Borno State whilst handing over relief materials and items procured for internally displaced persons (IDPS) in Borno State in the north eastern part of the federation to the Executive Governor, Hon, Kashim Shettima.

According to her “The NPA believes that there is need to strengthen our CSR which amongst others includes projects addressing the needs of host communities in other not just to enlist support and synergy towards a harmonious mutual dividend”, but to partner government in the quest to provide for IDPS and others that are in need.

Similarly, Hadiza Bala Usman stated that “this continued support is expected of us as a responsible corporate entities and agencies of the federal government of Nigeria.” She called on similar corporate entities to join hands in this very important journey.

The NPA helms person commended Governor Shettima for his commitment and courage in bringing dividends of good governance in a holistic manner to the people even under very difficult situations stressing that the developmental projects running through the state speak volume in this regard.

The executive of the State, Hon. Kashim Shettima appreciated the kind gestures from the NPA MD and promised that the relief items will be judiciously utilised across board in the affected areas, He later enlisted support from stakeholders in the maritime sector and beyond for the NPA MD, in her set agenda of making the NPA a model agency and hub in sub Saharan Africa.

Amongst the relief items unveiled during the event included bags of rice, beans, corn, millets, and tins of palm oil, mattresses and solar lamps.