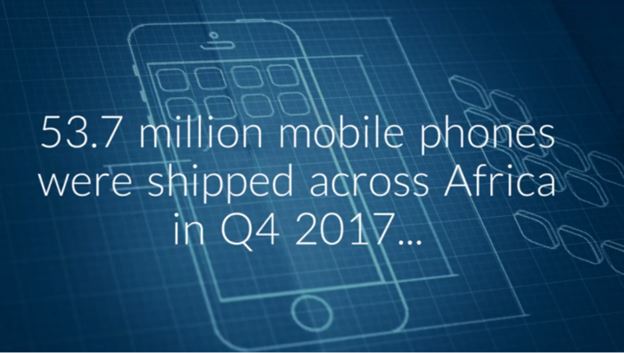 While 2018 was a tough year for worldwide smartphone shipments, Africa experienced year-on-year growth for first time since 2015, according to the latest figures announced by International Data Corporation (IDC).

Overall mobile phone shipments were down 1.9% year on year in 2018 to 215.3 million units, with feature phone accounting for 59.0% of shipments versus 41.0% for smartphones. This overall decline mainly comes from the sluggish performance of the feature phone segment in numerous countries across the region.

2018 was the first year since 2015 that Nigeria, South Africa, and Egypt have simultaneously experienced growth in mobile phone shipments. The Nigerian and Egyptian markets recovered from declines in 2017, thanks to the relative stability of exchange rates, the stronger presence of feature phones, and the introduction of new affordable smartphones.

In South Africa, the growth was driven by local brands such as Mobicel and Stylo pushing feature phones and ultra-low-end smartphones.

Local and regional brands accounted for a combined 14.3% share of Africa’s overall mobile phone market in 2018. This is broadly equal to the share of all Chinese brands in the market, excluding Transsion, which is primarily focused on serving Africa and accounted for a significant 48.7% of the total market’s volume in 2018.

“A new wave of local/regional brands are emerging across the continent,” says Taher Abdel-Hameed, a senior research analyst at IDC.

“Some emerged after restrictions were placed on imports in countries like Algeria, while others have emerged to tap into opportunities in the feature phone and entry-level smartphone segments that have been almost vacated by global brands. Despite the success of Transsion brands in both the smartphone and feature phone categories, it is also worth noting the phenomenal growth enjoyed by Huawei and its sub-brand Honor in Africa’s smartphone space. Together, these two brands saw their shipments increase by a combined 47.9% year on year in 2018, spurred by their ambitious expansion plans in emerging markets and strong focus on affordable devices.”

Looking ahead, IDC expects Africa’s overall mobile phone market to decline 0.8% year on year in 2019 to total 213.6 million units. Smartphone shipments are forecast to grow 5.4% over this period, spurred by the introduction of more affordable devices in the African market that will help drive progress in this space over the coming years. However, feature phone shipments are expected to decline 5.1% as the shift to smartphone gathers momentum.

Regarding 5G deployments, while several experiments are already underway in the region, IDC expects the commercialization of 5G services to start in most countries by 2020. However, the arrival of 5G and new designs like foldable devices are not expected to create huge momentum in Africa over the short term due to the high price tag that is attached to these devices.

“There is always the possibility of technological leapfrogging in the innovation accelerators domain when Africa’s 5G markets are considered,” says Ramazan Yavuz, a research manager at IDC.