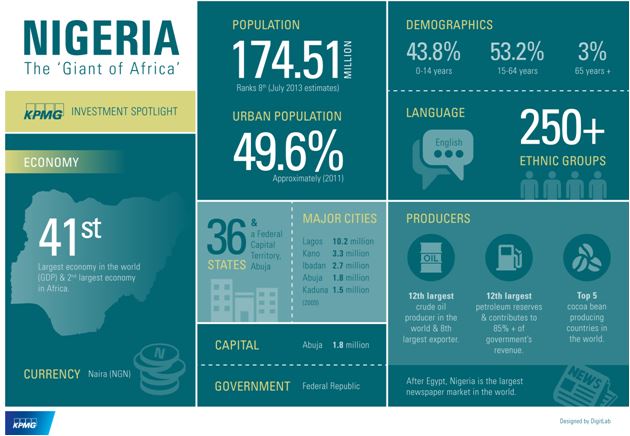 Despite the negative data surprise, we think there is a major positive to draw from the data: unlike the oil sector driven rebound in activity between Q2 – Q3:2017, growth was more broad-based in Q4 as the three major economic sectors – Industry, Services and Agriculture – expanded concurrently for the first time since Q4:2014.
Whilst Oil sector growth disappointed at 8.4% Y-o-Y (relative to Afrinvest forecast of 13.6% Y-o-Y) from 25.9% Y-o-Y growth in Q3 due to normalizing base and a 5.9% Q-o-Q decline in oil production to 1.91mb/d, the Industrial sector grew for the first time in eight quarters (+3.9% Y-o-Y) –  driven by a rebound in Manufacturing sector which expanded 0.1% Y-o-Y in the Quarter.

More importantly, the recovery in the Manufacturing sector was broad-based as 12 of the 14 sub-sectors rose with Oil Refining (-46.2% Y-o-Y) and Cement (-1.9% Y-o-Y) sectors being the major drags.

Similarly, Nigeria’s Services sector exited a 5-Quarter long recession as it posted a marginal growth of 0.1%, supported by rebound in Trade (2.1% Y-o-Y) and Financial Institutions (+2.6% Y-o-Y) which offset continued weakness in ICT (-1.5% Y-o-Y) and Real Estate (-5.9% Y-o-Y) sectors.
The recovery in the Manufacturing and Services sector was in line with optimism expressed by business managers in the CBN’s Purchasing Managers’ Survey (PMI) as both Manufacturing and Non-Manufacturing indices closed at record highs in Dec-2017.

Whilst the belated rebound in FX sensitive Trade and Manufacturing sectors – despite structural constraint of Port Congestion – was a major positive, the sustained contraction in ICT sector reflects a steep 6.1% Y-o-Y contraction in active voice subscribers from 154.5m in FY:2016 to 145.1m in FY:2017. This may however start to abate as both voice and data subscribers improved 3.7% and 5.3% Q-o-Q in Q4:2017 according to data released by the NBS last week.
The Agricultural sector outperformed Industry and Services as it rose 4.2% Y-o-Y from 3.1% in Q4:2016, the fastest pace of growth since Q3:2016, driven by stronger output posted in Crop Production sector (4.6% vs. 3.2% Y-o-Y in Q3:2017).

The impressive performance of Crop production corroborates reports of above-average harvest in most areas in the main harvest season which lasted between September and December due to favourable rainfall and impact of targeted financial interventions in the sector by the CBN and Federal Government.

Near Term Outlook Positive…We Raise FY: 2018 Estimate to 2.6%
Afrinvest says its outlook for the economy remains positive as we expect Oil sector low-base-push to last till Q4:2018 – particularly given that oil production disappointed in Q4:2017 and new barrels are expected from Total’s Egina field by Q4:2018.

Thus, we have raised Oil sector GDP growth projection from 8.8% to 11.8% Y-o-Y. Whilst structural constraints to non-oil sector growth – recurring energy scarcity, weak infrastructure and port congestion – remain headwinds, we note that the cyclical challenges will start to abate from 2018 against the backdrop of:

Low-base effect of ICT sector which contracted in FY: 2017 due to a 6.1% Y-o-Y decline in Active Voice subscribers.

Thus, we have increased Non-Oil growth estimate to 1.8% and consequently raised Aggregate GDP growth projection to 2.6% from 2.1%.
The positive data reported is a broad base reflection of the improvements that the economy has garnered after the recession suffered up until Q1:2017. Although the equities market may not directly react to the GDP data announcement, the improving macroeconomic conditions, especially in consumption and investments, are anticipated to impact on forward earnings growth.

In the fixed income market, yields are projected to continue reacting to inflation expectations and the FGN debt strategy to source for cheaper external debt in order to reduce near term servicing cost.