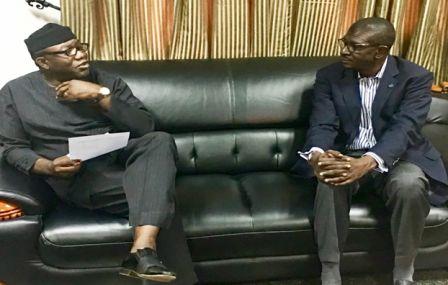 “Solid minerals, along with the other three sectors of manufacturing, agriculture, and services, is an essential pillar upon which our activities within the nonoil sectors rest, and deserves NEXIM Bank’s full support.” – Abba Bello

The MD/CEO of Nigerian Export-Import Bank, Abba Bello paid a courtesy visit to the Minister of Mines and Steel Development, Dr. Kayode Fayemi at the Ministry’s offices in Abuja to introduce himself and his executive management team to the Honourable Minister.

Bello used the opportunity of the visit to appreciate the commendable work the Minister and his team are doing in development of the solid minerals sector. According to the NEXIM Bank, “solid minerals, along with the other three sectors of manufacturing, agriculture, and services, is an essential pillar upon which our activities within the nonoil sectors rest, and deserves NEXIM Bank’s full support.”

Welcoming the NEXIM Bank team, D. Kayode expressed his appreciation to Abba Bello, mostly for recognising the importance of the sector and the strong synergy between the work of the Ministry and the Bank.

According to Hon. Minister Kayode, this much is underscored by the fact that Abba came calling with his team soon after he settled into his new role at the Bank. He noted that Abba, being a top-ranking professional banker, would be able to meet the challenges of his new office and contribute to the work of the Administration to fixing the Nigerian Mining industry to become a key contributor to achieving national goals of diversifying the sovereign revenue base and creating jobs.

The Honourable Minister used the opportunity of the visit to brief Abba and his executive team on the recent inauguration of the newly constituted Board of the Solid Minerals Development Fund (SMDF) on May 25.

According to Fayemi, the SMDF, which seeks to address the fundamental sectoral challenge of Insufficient Funding – a problem that has historically undermined the growth potentials of the sector, is an important milestone in Government’s efforts to reposition the Nigerian Mining industry.

Currently, according to the Minister, the Solid Minerals Roadmap, to which the SMDF would provide support, had prioritised the development of seven strategic minerals (7SM), namely coal, bitumen, limestone, iron Ore, barytes, gold and lead/zinc. Albeit, he stated that the list does not preclude investments in some other viable solid minerals if and when the funding is available, especially considering that the Roadmap clearly targets to integrate artisanal miners into the formal sector.

Fayemi stated that a close collaboration between the Ministry and the NEXIM will be strategic to growing the sector, particularly in achieving the goals set under the Solid Minerals Roadmap.

In this regard, the Ministry would want to work with the Bank in monitoring to ensure that the beneficiaries of its funding interventions within the sector use the loans judiciously. He indicated that the Ministry will also be relying on the expert technical advisory support of NEXIM from time to time.

Concluding, Fayemi mentioned that the Government is quite keen in mineral beneficiation as a way to bring value addition to the sector and also boost local content and import substitution.

Abba expressed immense appreciation to the Minister for his uncommon commitment to growing the solid minerals sector, and pledged that NEXIM Bank, in line with mandate, will continue to be a dependable partner with the Ministry in the commitment to fixing the Nigerian mining industry as an enabler to economic diversification and job reaction.