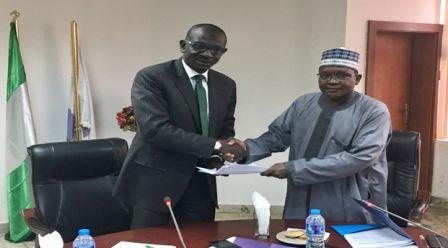 The new Managing Director of the Nigeria Export-Import Bank (NEXIM), Mr Abubakar Bello yesterday ceremonially took over the reins of leadership of the Bank from Mr. Bashir M. Wali, who was the Acting MD till Thursday, April 20, 2017.

The handover ceremony was a mere formality as the new team headed by Mr. Bello had resumed at the Bank with immediate effect on April 21st upon their appointments by President Muhammadu Buhari as communicated to the NEXIM Bank by the Office of the Secretary to the Government of the Federation (SGF) on Thursday, April 20th, 2017.