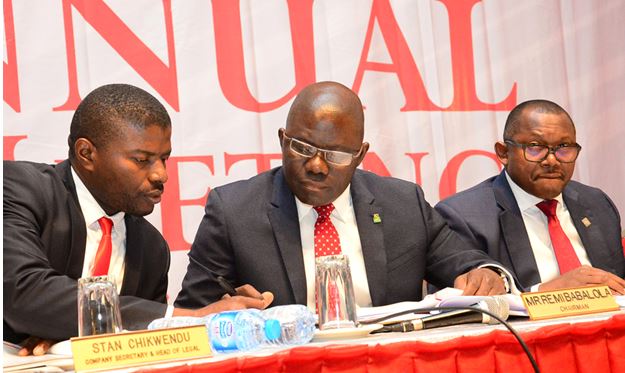 Law Union & Rock Insurance Plc, one of the leading general insurance companies in Nigeria held her 49th Annual General Meeting in Lagos. Despite the fragility of the economy in 2017, the company was able to break through all hurdles to pay dividend to its shareholders.

The Chairman of the Company, Mr. Remi Babalola, said the company’s profitability grew by 66.8%.

According to him, the company recorded good performance in 2017 with 8% growth in its top line over the figure from the previous year. A significant contribution to the profit came from the Company’s investment income.

The Gross Premium Written stood at N4.252billion compared to N3.936billion recorded in 2016. The Profit before tax of N1.099billion was achieved compared to N659million recorded in 2016 which indicates a steady performance improvement of our Company. Total assets grew by 16.9% to N10.031billion from N8.58billion posted in 2016 financial year with a 28.6% growth in Shareholders’ Funds from N5.03billion to N6.47bilion.

The company also recorded a giant feat in its general reserves with retained earnings of N704 million from accumulated loss of N24 million recorded in 2016. In recognition of this performance, the Company declared a cash dividend of 4Kobo per share for the financial year.

Babalola said the company is stronger, better, bigger and more than ever before; with one of the highest ratings in Claim Paying Ability (CPA) in the industry. The Chairman also presented the new Executive Director, Technical/Operations Mr. Olasupo Sogelola and Mr. Kunle Aluko (non-executive director) to the shareholders. Both appointments have been approved by the NAICOM.

The Managing Director of the Company, Mr. Jide Orimolade in his speech said that the Company will not relent in delivery of the best service to the customers. According to him, the loyalty of the customers were very instrumental to the consistent growth of the Company’s top-line in the past few years which has enable the company to eliminate its accumulated loss and able to cross to a positive retained earnings in 2017.

The Shareholders present at the event were in happy mood as three retiring directors -Mr.Remi Babalola (Board of Directors Chairman), Mr. Obinna Onunkwo and Mrs. Funmi Ekundayo were re-elected for another three years.