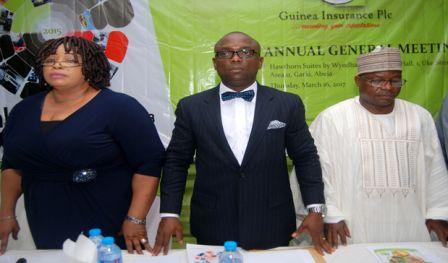 During the company’s 2015/58th Annual General Meeting held recently at Abuja, the company reported a Gross Premium Income increase of 16.6% amounting to N1.01 billion as against N867.99 million recorded in 2014.

During an interactive session, the Chairman of the Board of Directors, Godson Ugochukwu, while reacting to a question raised by Mr. Patrick Agidua, a shareholder of the company i.e. “how does the new board intend to take the company on a path of profitability?” Ugochukwu said “the board is currently manned by eminent personalities who have distinguished themselves in various business and professional spheres. We have decided to look inwards to elevate a deserving and competent top executive to chart a new course for the company. This is cost saving and the incentive to deliver adequately will be heightened. I am particularly happy to announce to you today that our efforts in this regard, had begun to pay off as your company turned a profit at the end of the 2016 financial year.”

To the shareholders in general, he added “the new board has instituted a corporate culture and performance metrics that is characterised by: poise, good deportment and exceptional service delivery. Year 2015 results are pedestrian and unrepresentative of our business ideals for your company.

We therefore, request support from all quarters to enable us in togetherness, get your company out of the woods and guided to a path of sustained profitability…in the words of Henry Ford – Coming together is a beginning; keeping together is progress; working together is success.”

At the AGM, shareholders threw their weight behind the newly constituted board of the company chaired by Godson Ugochukwu, a seasoned legal practitioner with over 14 years of consummate legal expertise in all aspects of Nigerian and International Laws.