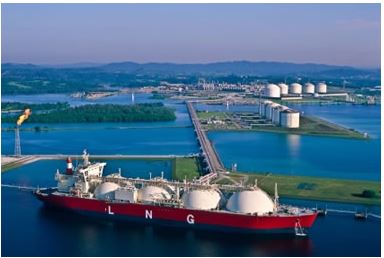 Located at the Port of Akonikien, the landmark regasification plant will enable the storage, transportation and distribution of liquefied natural gas (LNG) to the country’s mainland; 12 bullet tanks will carry 14,000 cubic meters of storage capacity, supported by a truck loading station and 12-kilometers of ten-inch gas and diesel pipelines.

The project will be led by local construction and engineering firm Elite Construcciones; The project forms part of Equatorial Guinea’s regional LNG2Africa initiative which seeks to drive gas monetization through in-country gas-to-power projects.
Equatorial Guinea is set to construct the first liquefied natural gas (LNG) storage and regasification plant in West Africa, advancing efforts to monetize gas resources through the creation of a domestic gas-to-power infrastructure.

The Akonikien project is the first gas-to-power development in Equatorial Guinea’s LNG2Africa initiative. Launched by the Ministry of Mines and Hydrocarbons in 2018, the initiative seeks to facilitate the production and trade of LNG through the creation of a domestic gas-to-power infrastructure and intra-African LNG industry.