The Ebola Virus Disease (EVD) pandemic has gripped the world like no other scourge in decades. For medical experts, what makes Ebola more dangerous than others before it is the high fatality rate and ease of spread, which results in rapid death of infected persons and multiple transmission between individuals.

And for the global insurance industry, Ebola represents yet another scourge on the balance sheet of insurance companies as claims could arise rapidly to provide succour to families of victims.
In this report, we present various angles of the effect of EVD on the insurance industry.

• As of October 10, the Ebola virus has infected at least 8,399 people and killed 4,035, according to the World Health Organisation. This includes 4,762 confirmed cases, 2,196 probable cases and 1,652 suspected cases.
• As of October 10, all but four of the cases were in four countries in Africa (Guinea, Liberia, Sierra Leone, and Nigeria). One was in Senegal, one in Spain, and (as of October 12) two in the United States.
• There are five known strains of the Ebola virus. The one causing the illness and deaths noted above is the Zaire strain, which was identified in 1976.
• There is currently no cure and no vaccine for this virus. Treatment is isolation (to prevent spread) and focus on symptoms—mainly dialysis and fluids to prevent dehydration and reduce fever.

• The mortality rate of infected people to date is roughly 50 percent.
• Unlike influenza viruses, the Ebola virus is transmitted only by contact with an infected person’s bodily fluids (e.g., blood, saliva, sweat, diarrhea, vomit, etc.) during the incubation period or shortly thereafter. Contact with the fluids could be from contact with sheets, mattresses, medical equipment or any other surface to which the fluids were transferred.

If the number of cases in Africa continues on its exponential ascent, the number of people who might carry the virus elsewhere around the world will also grow. The number of cases in Africa is likely to grow if isolation of the sick, tracking their contacts, and careful procedures followed by health-care workers, proves to be inadequate. An especially concerning scenario is the travel of infected people from Africa to India,
China or other heavily populated countries, where there are billions of people living in many densely-populated cities with relatively weak health-care systems.
Another element of a worst-case scenario would be screening systems at U.S. and other ports of entry that are ineffective in identifying people carrying the virus. This was how both the U.S. and Spanish cases gained entry into their respective countries. If improvements in screening are not completely effective, additional infected individuals could enter countries around the world, potentially leading to the spread of Ebola in the developed world and beyond.
Another threat is the possibility that the virus could mutate into one that is more virulent—producing a higher death rate. This might also increase the ease of spread of the virus. 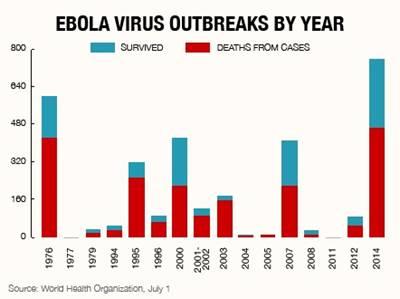 Effect on Life and Health Insurance

• The effects on the Life and Health insurance industries will clearly depend on whether the infected people are insured. Some of those who have died up to now were children and almost certainly did not have life insurance.
• Even if the Ebola virus spreads to infect tens or even hundreds of thousands of adults in Africa, it is not likely to trigger many life insurance or health insurance claims there. Life insurance coverage in the three most affected countries—Guinea, Liberia and Sierra Leone—is extremely low. Indeed, in Swiss Re’s most recent report on life premiums per capita (for 2013), the calculation for all three of these countries are so small that none makes the list.
• Even in the unlikely event that the Ebola virus spreads to infect tens of thousands of adults in the United States, the financial impact will likely be quite manageable. This is because perhaps one-third of adults in the U.S. have life insurance only through their employment, and the amount is typically equal to one year’s income. Another one-third have individual life insurance, with the average death benefit in the $200,000 range. In a typical year life insurers pay about 2 million death claims, so another 100,000 would be only 5 percent more than typical. Moreover, most life insurers are well capitalized, and even the largest life insurers have reinsurance to prevent a surge in death claims from imperiling their solvency, so that the net effect would likely be, at most, a reduction in the profit they would otherwise record.
• The cost of caring for Ebola cases would likely be at the high end of health insurance claims, and the effect on health insurers would depend on the number of people suspected of being infected. Many people would need to be tested to see whether they have contracted the virus, and the cost of isolation of those affected could be substantial. Note that some individuals may have no health insurance, as was the case with the index (first) patient who died of Ebola at a Dallas hospital on October 8. In such cases, treatment costs will likely be borne outside the private health insurance system.

• The main effect on the Property/Casualty insurance industry would likely be on companies writing Workers Compensation insurance because health-care workers could be most directly exposed (as happened in Texas and in several African countries). Workers Compensation pays for the cost of medical care and lost income for people who become ill in the course of their work, and pays death benefits if they die from a work-related cause. As with life insurance, it is unlikely that many workers in the main affected African countries have workers compensation-type coverages; the latest Swiss Re report indicates that the level of premiums per capita for all non-life insurance coverages combined (not just Workers Compensation) in the three most-affected countries is so low as to not be listed. In the United States, in contrast, Workers Compensation coverage is nearly universal, but the likelihood of claims is low, assuming that employers and their workers take CDC-recommended precautions. As with life insurance coverage, reinsurance will help mitigate the financial effect of a surge in claims, which are likely to be very costly in the event of actual work-related infections.
• Other possible effects might be on various liability insurance lines. These include General Liability, Directors & Officers (D&O) Liability and Medical Malpractice (Med Mal) Liability. General liability and D&O claims might be filed asserting that the policy owner was negligent in failing to prevent transmission of the virus. For example, a claim might be filed alleging negligent disposal of contaminated waste, pursuing either General Liability or Med Mal recovery. Med Mal claims might assert that proper medical protocols were not followed, resulting in infection by the Ebola virus, or that the disease was not properly diagnosed or diagnosed in a timely manner or that the treatment protocol itself and/or care rendered was somehow negligent. At this stage it is impossible to forecast the precise number of such claims or the amounts of damages that might be sought. That said, assuming the CDC’s protocols are successfully followed, the number of Ebola cases should be small, thereby limiting the number and likelihood of tort actions that can impact various liability coverages.