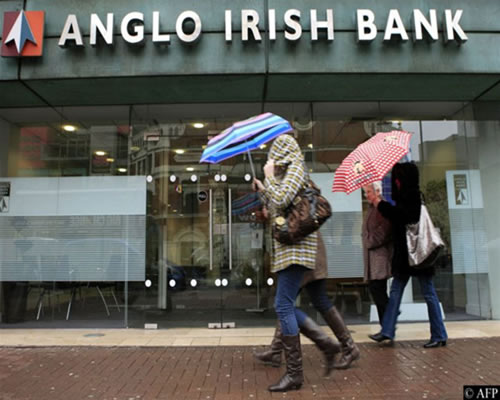 Ireland has dissolved one of its “bad banks” in an emergency measure designed to pave the way for a new debt-repayment deal with the European Central Bank.

Lawmakers in both chambers of Ireland’s parliament overwhelmingly voted to liquidate the Irish Bank Resolution Corp.(IBRC).

Ireland’s head of state, President Michael D. Higgins, was summoned back from the start of a three-day visit to Italy to sign the bill into law an hour later.

Finance Minister Michael Noonan told lawmakers they must approve the measure before Ireland’s courts opened because private creditors of the state-owned debt management bank would file lawsuits to block or complicate the bank’s dismantling.

Noonan said that shutting the 2-year-old bank would “come as quite a shock” to the bank’s 800 employees, who immediately lost their jobs. But he said the government had no choice after its plans, drafted months ago, were leaked to international news agencies.

“Did you ever hear of a liquidation that was announced one day and not implemented for several days or weeks?” Noonan told lawmakers, many of whom were given just minutes to read the 57-page bill. “Creditors will line up to strip the company of everything they can lay their hands on, and debtors will not pay a penny because they know the company is going into liquidation.”

Noonan said he was hopeful that European Central Bank governors meeting Thursday in Frankfurt would approve Ireland’s latest proposals to reduce its annual bank-bailout bills. Ireland has been seeking such a deal for two years.

Under terms of a 2010 agreement between Ireland’s previous government and ECB chiefs, Ireland must pay €3.06 billion ($4.1 billion) annually through 2023 and smaller amounts through 2031 to cover the costs of repaying the global bondholders of Anglo and Irish Nationwide. The total cost of that agreement including interest is €48 billion ($65 billion) — or more than €10,000 ($14,000) for every man, woman and child in Ireland.

Since gaining office two years ago, Prime Minister Enda Kenny has lobbied European partners to reduce those repayment costs by lowering their interest rates and spreading payments over an even longer period. Kenny has stressed that Ireland wasn’t seeking any default or partial write-offs of the debt, because that would undermine Ireland’s efforts to repair its creditworthiness.

Irish Central Bank Governor Patrick Honohan presented plans to other governors of the 17-nation eurozone at a Frankfurt dinner Wednesday. Irish government officials said the plan would allow the existing bank-bailout bill to be converted into a vastly different repayment schedule backed by new Irish government bonds that would mature from 2040 onwards.

The new arrangement would allow Ireland to make interest-only payments at lower average rates until the bonds mature and must be repaid in full. This would reduce Ireland’s repayments by more than €1 billion ($1.35 billion) annually, making it easier for Ireland to meet its deficit-cutting targets more quickly.