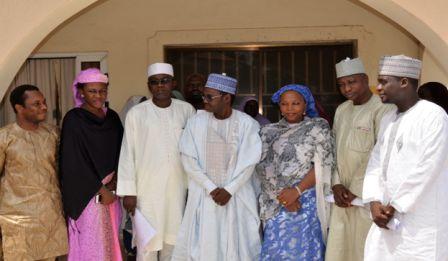 The Executive Governor of Adamawa State, Senator Mohammed Umar Jibrilla Bindo has commended the management of Asset Management Corporation of Nigeria (AMCON) for partnering with the government and people of Adamawa State towards the provision of educational materials and other support items especially for the Internally Displaced Persons (IDPs) in the state.

The items AMCON donated to the state, which would be distributed to seven local government areas in the state include scholastic materials to Mainstreamed Learners and Parents Caregivers; starter packs for small scale businesses as well as food items for the affected families in the host communities.

Speaking in Yola on Thursday when he received a team of AMCON officials who were in Yola to commence distribution of relief materials, Bindo said he was happy that AMCON support and association is coming at a time the incumbent government of Adamawa State under his humble self is also focusing a lot of attention to educational provision to children across the state, which he said was nearly destroyed as a result of insurgence in the Northeastern part of Nigeria.

He said, “On behalf of the government of Adamawa and the good people of the state, I welcome AMCON to Government House, Yola. We are happy to receive you and are also happy with the support you are giving us in the area of education with the intervention you are providing in that regard. I want to let you know that we have also declared state of emergency in education in the state because it was really bad when we came in but with this sort of assistance coming from your organization and your partners, which is the United States Agency International Development (USAID) Education Crisis Response (ECR), I want to give you the assurance that we do not need to lose any advantage going forward.”

Speaking in the same vein but at a separate meeting, the District Head of Girei, Dr. Ahmed Ibrahim Mustafa,Ubandoma Adamawa also commended the management and staff of Asset Management Corporation of Nigeria (AMCON) for coming to the aide of victims of insurgence and called on other well-meaning organisations in the country to do same.

Dr. Mustafa who flagged-off of the distribution said such a gesture from AMCON who is collaborating with USAID – ECR) would go a long way to reassuring the beneficiaries, their families and the host communities that all hope is not lost.

He said Girei, which AMCON chose to flag-off the exercise showed that the leadership of the Corporation led by Mr. Ahmed Kuru, Managing Director/Chief Executive Officer is in sync with history because Girei was indeed the first community in Adamawa State to accommodate thousands of Internally Displaced Persons (IDPs).

According to him, the community gave up their schools, provided farm lands for the affected families among other supports, which helped the IDPs settle down in the state. He therefore thanked AMCON and the Education Crisis Response (ECR) team for the rare support and called on well-meaning individuals and corporate organisations like AMCON to continually donate to the rehabilitation of the affected individuals and rebuilding of the Northeast.

Earlier, Mr. Usman Abubakar, who led the AMCON team and also represented the MD/CEO informed that the relief items donated by AMCON would be distributed to beneficiaries across the seven local government areas of the state.

According to him, other local government areas that would join Girei include Fufore, Shelleng, Song, Numan, Yola North and Yola South where over 3,000 individuals would directly benefit from the items. He also charged the officials of ECR to ensure that the items are distributed as fast as possible so as to cushion the suffering of the beneficiaries.